“My aim is to illuminate the dignity and humanity that shines through regardless of the challenges of poverty and oppression that impact these people and communities.” Tariq Zaidi

Life for Brazil’s poorest communities got a lot worse after the country spent billions of dollars on the 2014 World Cup and the 2016 Olympics.

Award-winning London-based photographer Tariq Zaidi went there to document the struggle – and pride – of people who call Rio’s favelas home. 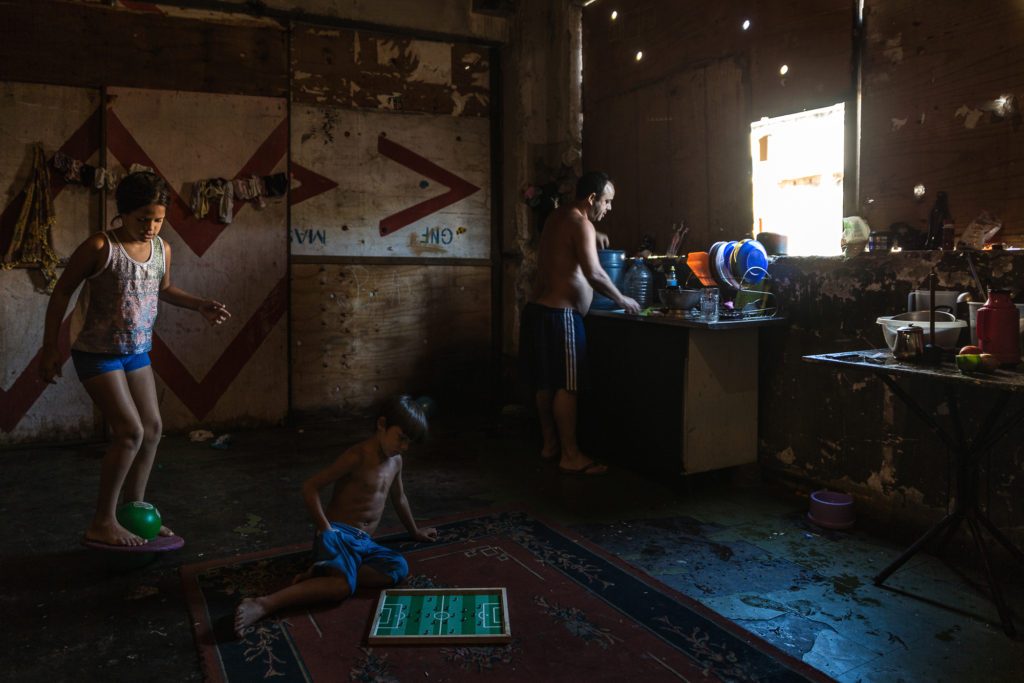 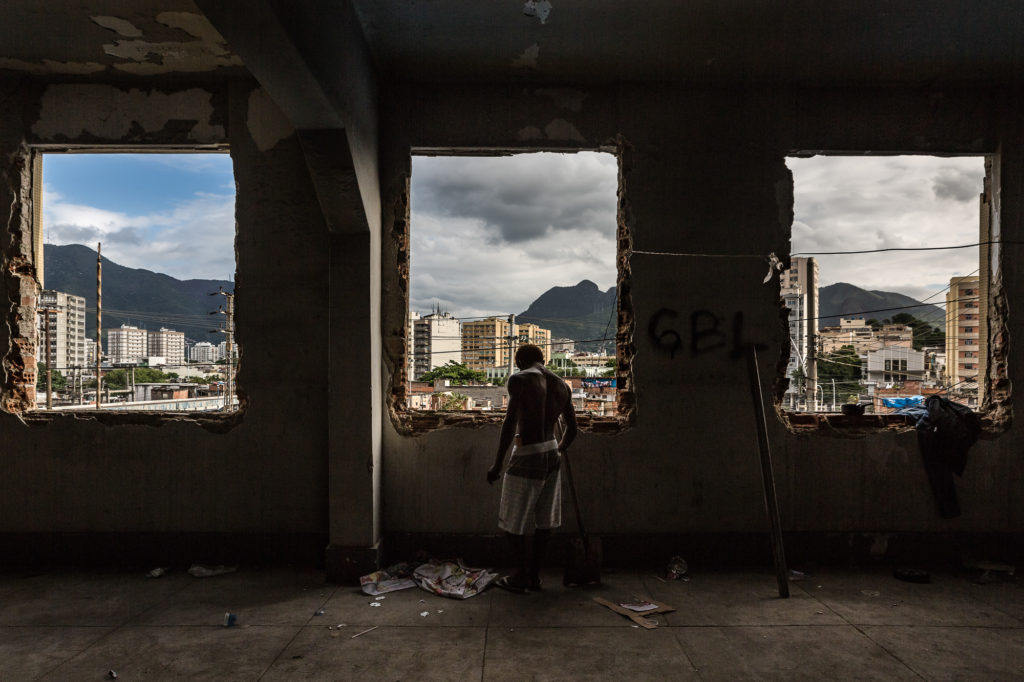 A man stands at the windows of the abandoned Ministry of Finance building (now an occupied building/squat) in the ‘Favela’ Mangueira community, North Zone, Rio de Janeiro, Brazil.
In 2010, Mayor Eduardo Paes included the “Morar Carioca” program as a centerpiece of the social legacy for the 2016 Olympic Games. With a budget of around R$8.5 billion ($ 2.62 billion), pledged to upgrade and integrate every favela into the formal city by the year 2020. The plan has mostly failed to materialize.

In his series, “Empty Promises: Priced out of Rio’s favelas,” Zaidi documents life in the Favela Manguiera community, just 1km from the Maracanã Stadium.

“In their bid to host the 2014 World Cup and 2016 Olympics, Brazilian authorities promised to improve life in the favelas of Rio,” Zaidi writes in his project description. “But the ‘pioneering’ pacification schemes and the promise to splash about billions of dollars remodeling the slums as part of the Morar Carioca (“Rio Living”) program has had an unintended consequence.”

But his documentary work is about more than showing the dark side of Rio. 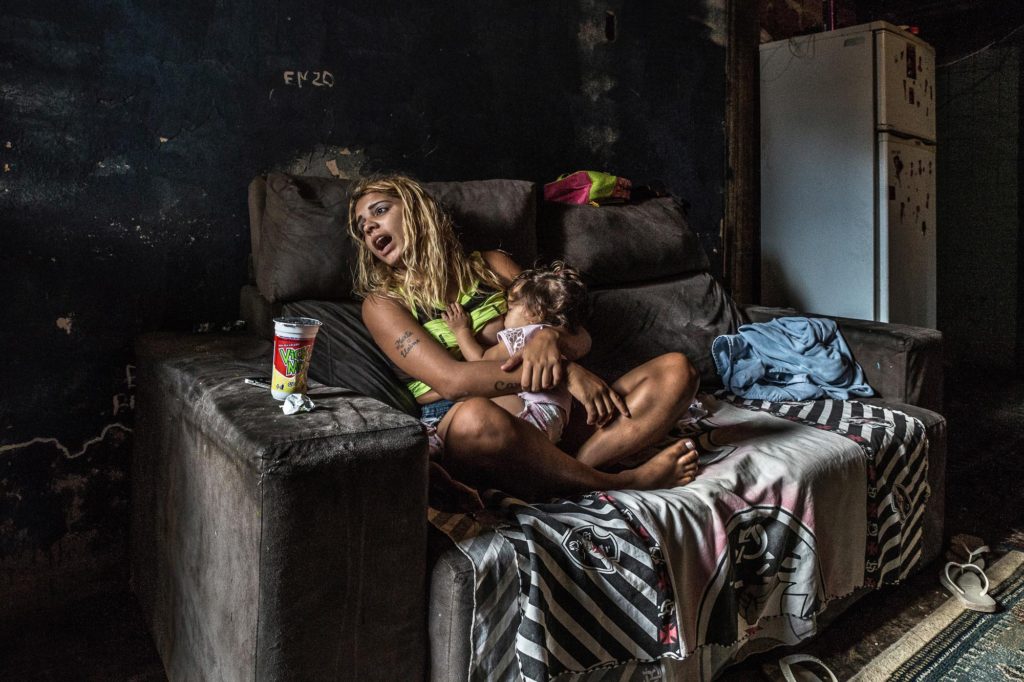 5 April 2017 Pamela, 16, with her 7-month old daughter; lives with her mother at the old abandoned IBGE (Brazilian Institute of Geography and Statistics) building; an occupied squat of around 100 families. Favela Mangueira community, Rio de Janeiro, Brazil

“Despite the difficulties of their living conditions, this community is bound together by a sense of camaraderie, dignity and a pride in the place they call home.”

Zaidi’s work in Brazil is part of his ongoing personal project, a long-term effort spanning six countries to produce a visual documentary anthology focused on “capturing the human spirit across some of the poorest communities in the world.”

“My aim is to illuminate the dignity and humanity that shines through regardless of the challenges of poverty and oppression that impact these people and communities,” Zaidi says.

Eventually, he’d like to show the work, about 50 percent complete, in local communities where it was made, as well as in international exhibitions and in a published book. 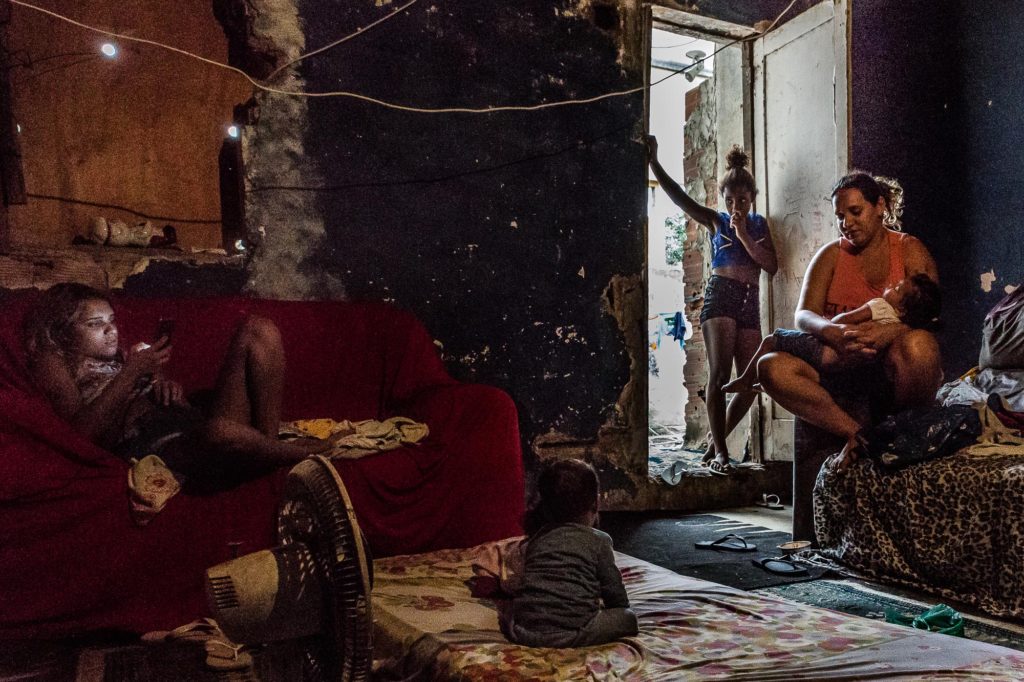 28 April 2017 Pamela (pictured on the left) checks her mobile phone. She has been living at the occupied building of IBGE for the last 15 years. Favela Mangueira community, Rio de Janeiro, Brazil. 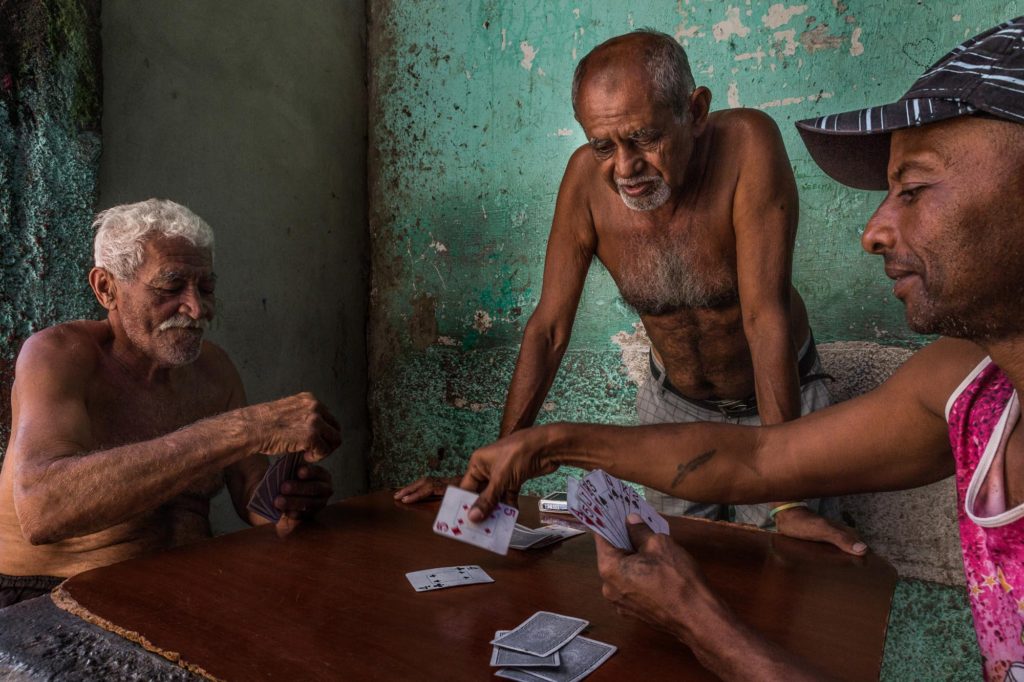 After 20 years working in the corporate world, Zaidi gave up an executive management position to pursue photography, with a specific goal of documenting social issues.

“I was so tired of the corporate environment, it was just killing me and I felt like I was going to die if I kept doing this,” he said. “I felt the need to live, do what I love and give it a shot.”

“I was very lucky,” he says. “I had a tremendous amount of success for a beginner in my first year. But you need to do the research. What has already been done, what are going to do differently, what are you going to do better. I spent a hell of a lot of time researching what is out there already, from the countries I visit to the people I meet with to the subject matter I want to tackle. And one of the most important things is, whatever you do, you have to be humble to the people you are working with. No judgement ever. If you are humble and respectful, they will allow you to get closer to them and closer to their lives. That is where amazing images come from.”

Gear: “You really do not need lots of equipment. I basically use one body (Canon 5D III) and one 24-70mm lens, that’s pretty much it. My total stuff that I take on a trip for a month, including clothing, lenses, laptop, etc., weighs less than 10kg.”

Top Advice: “Don’t give up. The next day will be better or maybe something amazing will happen right in front of you.” 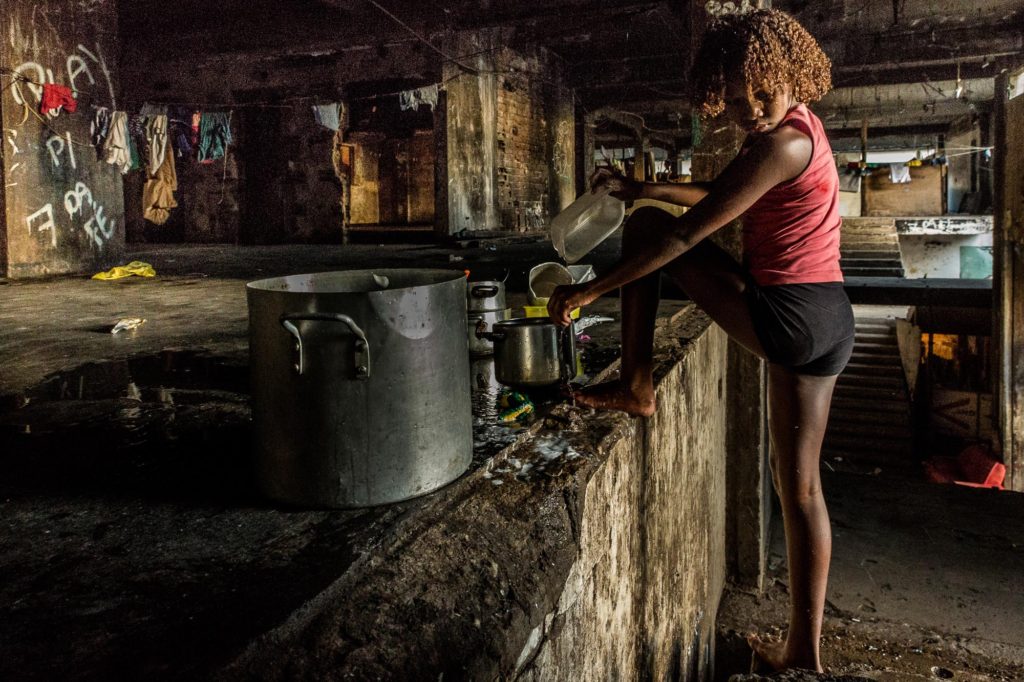 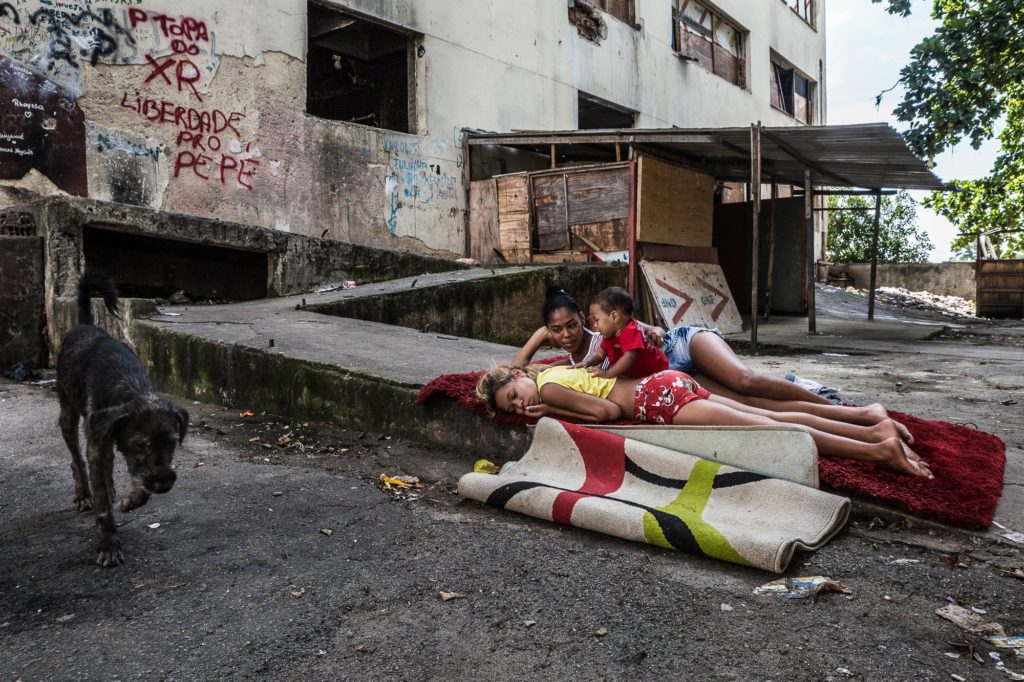 Girls playing with a baby on a carpet in front of the abandoned IBGE building, ‘Favela’ Mangueira community, Rio de Janeiro, Brazil. 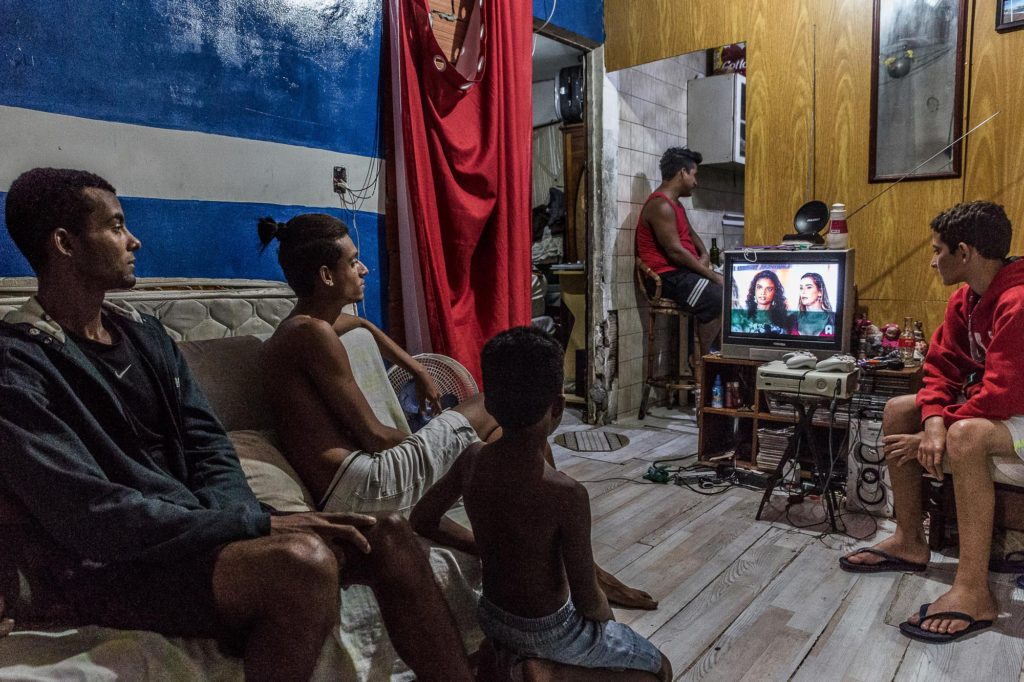 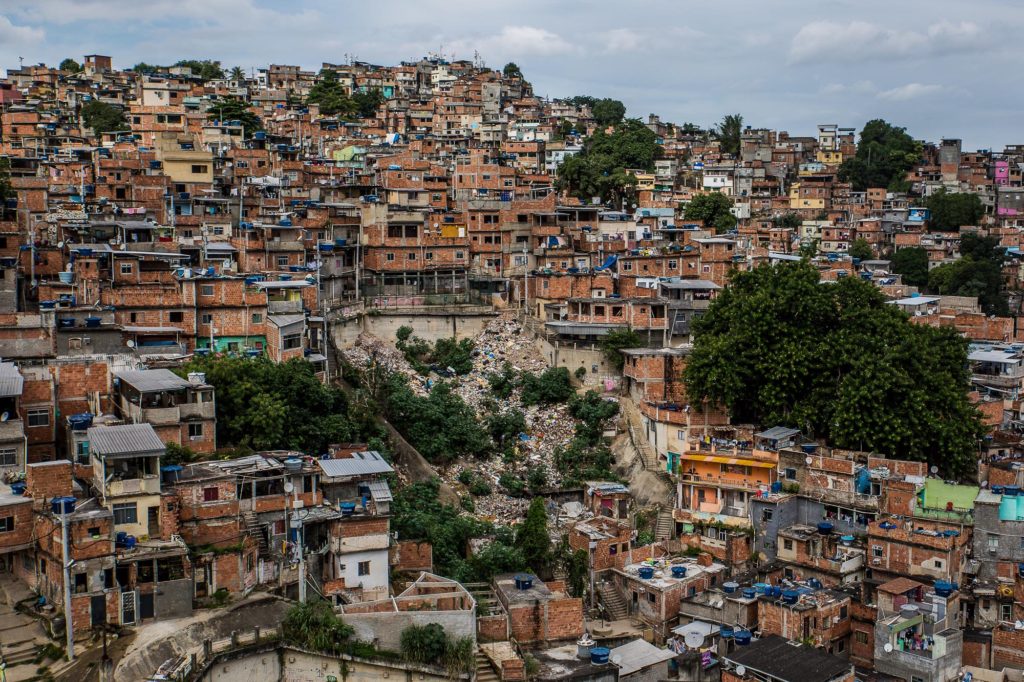 ‘Favela’ Mangueira community, North Zone, Rio de Janeiro, Brazil.
The residents of the favela communities in Rio continue to hope for change; however, the chances for any improvement to their living situation remains uncertain. According to the New York Times (Feb 2017), the new mayor is projecting an almost $1 billion budget shortfall this year, and the state budget is expected to fall more than $6 billion short.
Despite the difficulties that persist, two-thirds of those surveyed said they did not want to leave their favela neighborhood. While their fate is likely to worsen, what binds this community together is a sense of camaraderie, pride and dignity that would probably shame most richer communities in the affluent West.