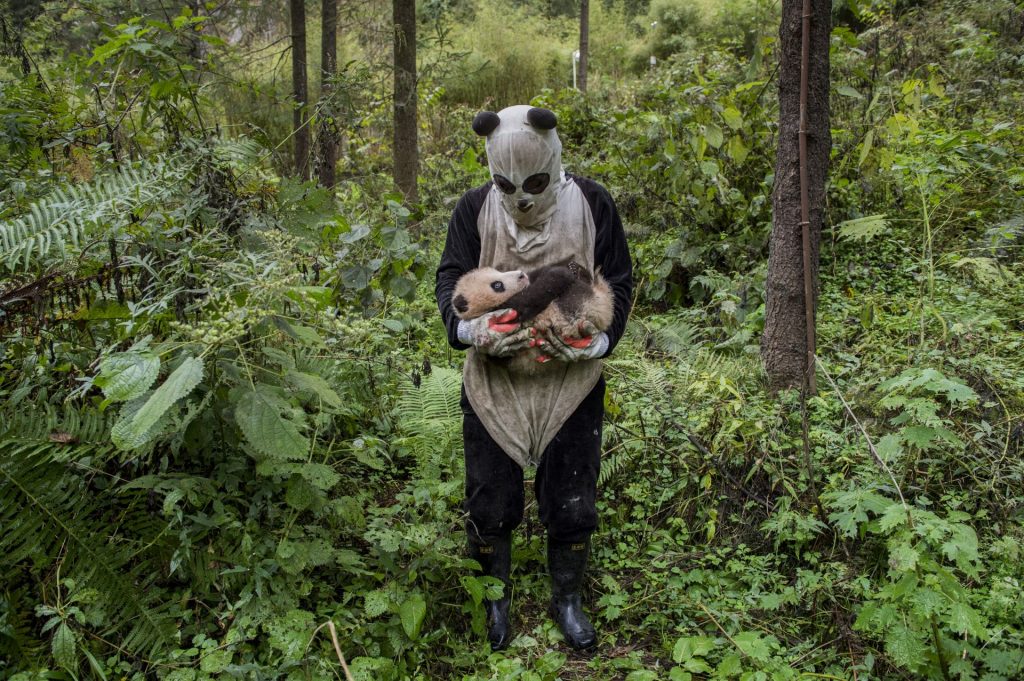 Is a panda cub fooled by a panda suit? That’s the hope at Wolong’s Hetaoping center, where captive-bred bears training for life in the wild are kept relatively sheltered from human contact, even during a rare hands-on checkup.

“I use nature as the foil but it’s about us, our future, and where we are going,” says Vitale, who began her career covering brutal global conflicts.

Last summer, her incredible “Pandas Get to Know Their Wild Side,” photo story in the August 2016 issue of National Geographic was a global sensation. Vitale also won a 2017 World Press Photo Award for the project.

The piece documents experimental and largely successful efforts by Chinese bear keepers at the Hetaoping Wolong Panda Center to train cubs born in captivity how to survive in the wilderness. 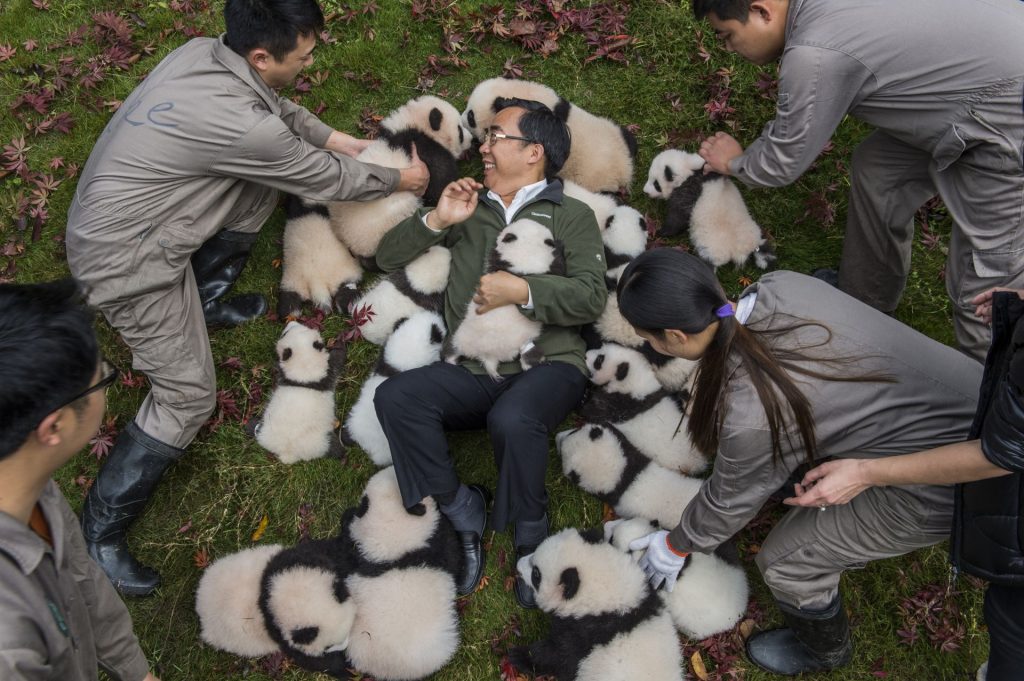 Zhang Hemin – “Papa Panda” to his staff – poses with cubs born in 2015 at Bifengxia Panda Base. “Some local people say giant pandas have magic powers,” says Zhang, who directs many of China’s panda conservation efforts. “To me, they simply represent beauty and peace.” 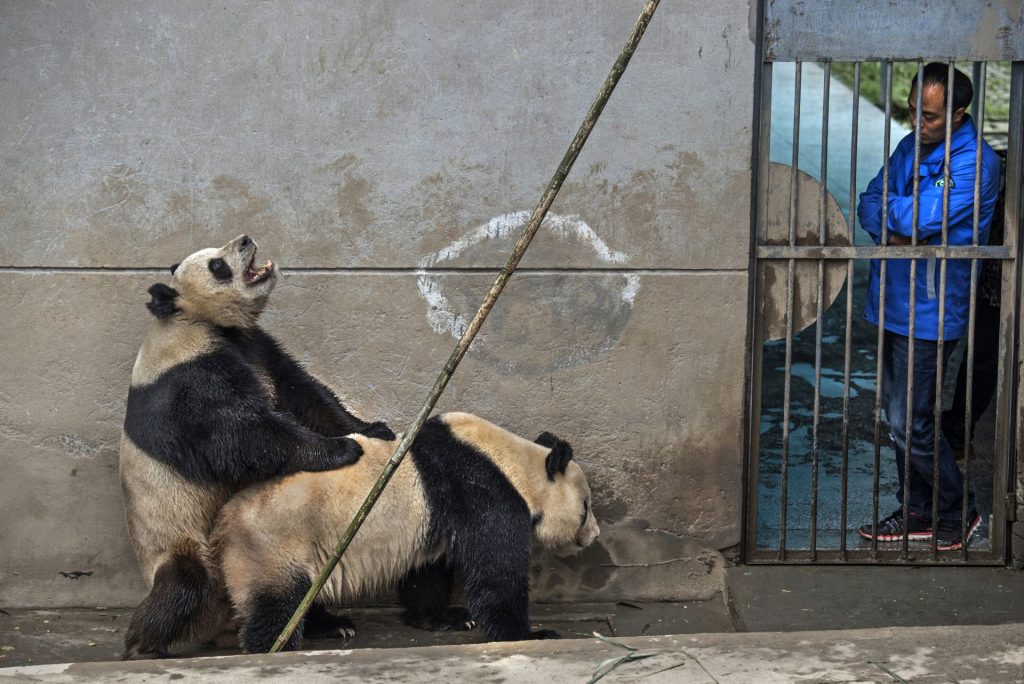 At Bifengxia, bears mate under keepers’ watch-a far cry from the privacy they have in the wild. The panda base’s operators are finding ways to allow for natural reproductive behaviors such as scent marking, mate choice, and male competition.

China is working hard – with less than 2,000 giant pandas currently living in the wild – to protect the bears within its borders.

Behind the scenes, Vitale said the biggest challenge was getting access to the animals.

“With only a few thousand in the world, the Chinese treat it as a national symbol and each panda is closely guarded and watched. They are multi-million dollar bears that everyone treats with kid gloves, and they are highly vulnerable. Getting close without interfering with their biology and conservation, in a way that is acceptable to its very protective minders, was challenging,” she told World Press Photo.

The second biggest challenge was the patience required to photograph the bears and make unique images of one of the most photographed animals in the world.

Telling the story of the pandas and their fate isn’t just about the pandas, but about every connected thing on earth, Vitale said, adding that she’s come to realize that even for wildlife and nature stories, she can bring that same sensibility into the images. 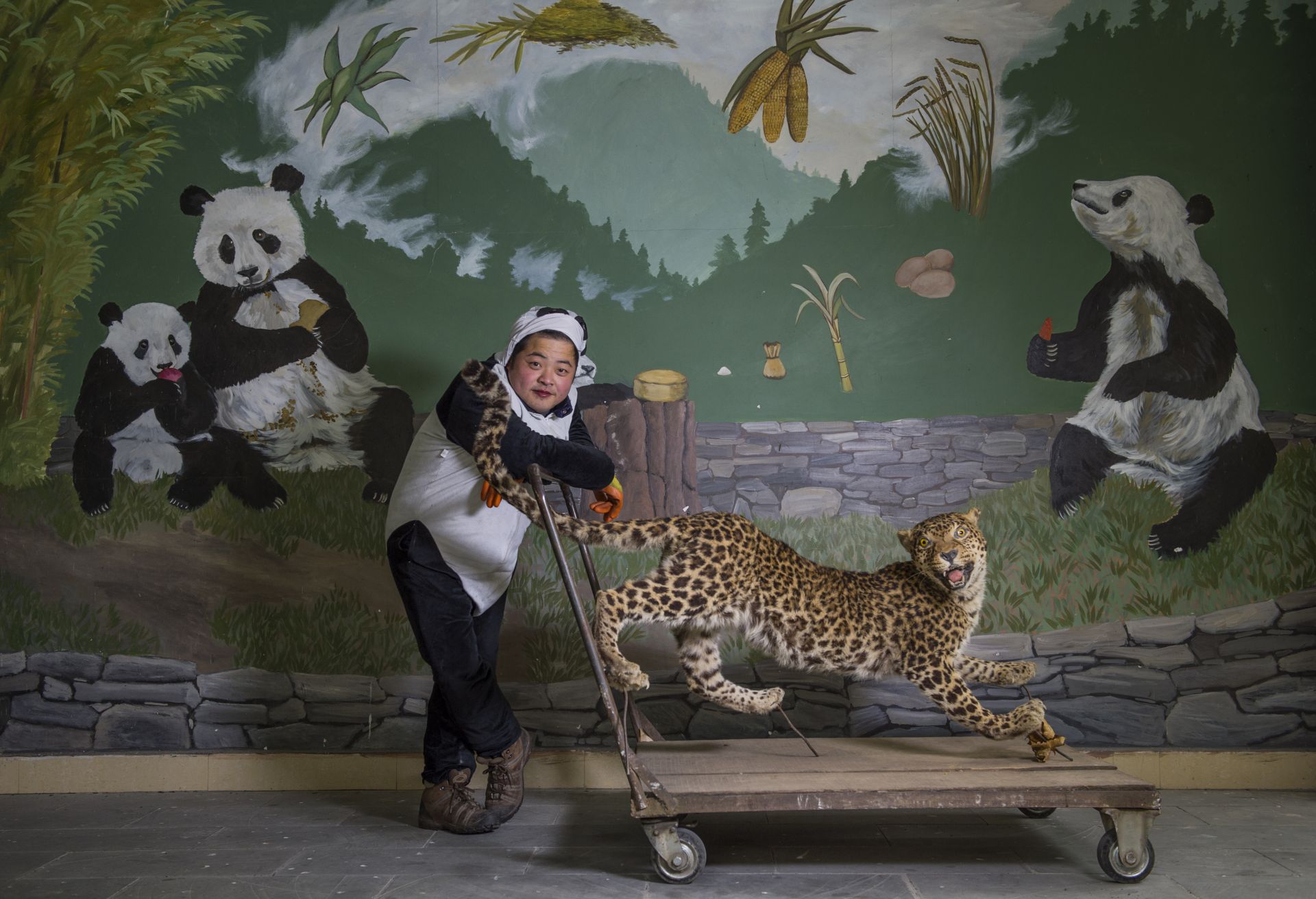 Gao Xiaowen poses with the stuffed leopard that Wolong keepers use to train young pandas to fear their biggest wild foe. A cub’s reactions to the “predator” and its recorded growls help determine if the bear is prepared to survive on its own.

“Here is the thing that really struck me. Everything is connected to nature.  Even though these issues I was covering were issues of conflict and security, every one of those issues ended up being dependent on nature for its outcomes,” Vitale says.

Vitale brought the same attention and sensitivity to conflict and security to her stunning images and story in the May 2017 National Geographic dispatch about Kenyan Samburu warriors who are now protecting the elephants they once feared.

“This is the biggest story out there. It’s not really about animals. It’s really about us,” Vitale says. “I’m not a nature photographer. I’ve focused on continuing to tell the story of what connects us all but now I am using the lens of nature; Our home.” 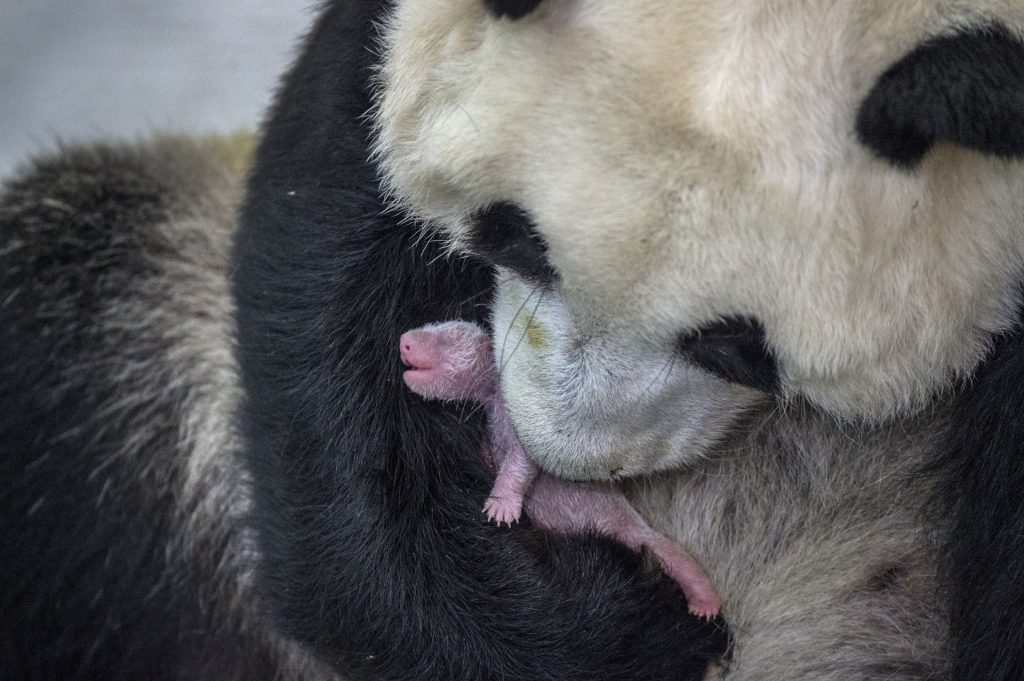 Blind, nearly hairless, squeaky, and 1/900 the size of its mother, a newborn panda is as needy as it gets. But it won’t be for long: The panda is among the fastest growing mammals, increasing from around four ounces to four pounds in its first month. 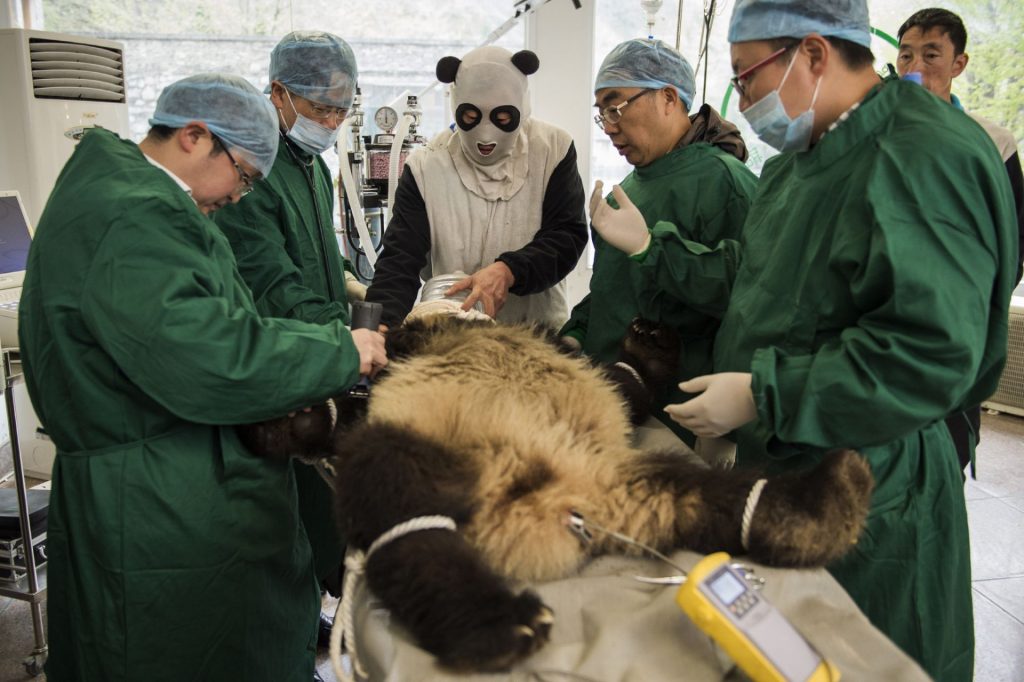 Panda keepers do a health check on giant panda named Hua Jiao (Delicate Beauty) before she finishes “wild training” at Wolong’s Hetaoping center which is part of the China Conservation and Research Center for the Giant Panda in Sichuan Province, China. Bears have to be trained to live in the wild and mustn’t get used to seeing humans. Even the caretakers who clean the animals’ cages wear costumes that make them look (and smell) like pandas.

Vitale recently joined Ripple Effect Images, an organization of renowned female scientists, writers, photographers and filmmakers. Working together, the women create “powerful and persuasive stories that shed light on the hardships women in developing countries face and the programs that can help them,” according to Vitale’s website. She is also on the Photojournalism Advisory Council for the Alexia Foundation, an organization dedicated to helping photojournalists give voice to those who go unheard, foster understanding and expose social injustice.

“Annie Griffiths invited me to be one of the founding members of Ripple,” Vitale says. “It was completely in line with the work I was already covering. I had been making a film about climate change and adaptation and I see this as the most important story of our time.”

In February 2017, Vitale reported to World Press Photo that the giant panda was taken off the endangered species list one month after publishing the story. 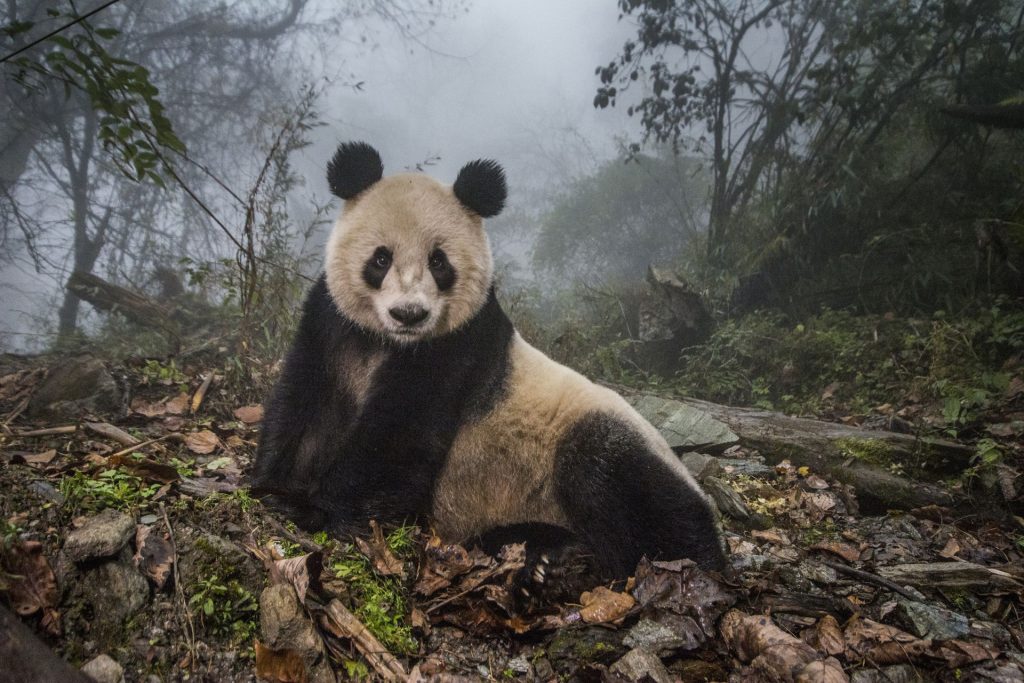 Ye Ye, a 16-year-old giant panda, lounges in a wild enclosure at a conservation center in Wolong Nature Reserve. Her name, whose characters represent Japan and China, celebrates the friendship between the two nations. Ye Ye’s cub Hua Yan (Pretty Girl) is being trained for release into the wild.

In fact, the International Union for Conservation of Nature classified China’s wild panda population as “vulnerable” instead of “endangered” species. The population was reported to have increased to 1,864 in 2014 from 1,596 in 2004, with credit given to Chinese agencies enforcing poaching bans and expanding forest reserves.

The report warned, however, that despite better protection, climate change is predicted to wipe out more than 35% of the panda’s natural bamboo habitat in the next 80 years. Pandas must eat 12-38kg of bamboo every day to meet their energy needs. 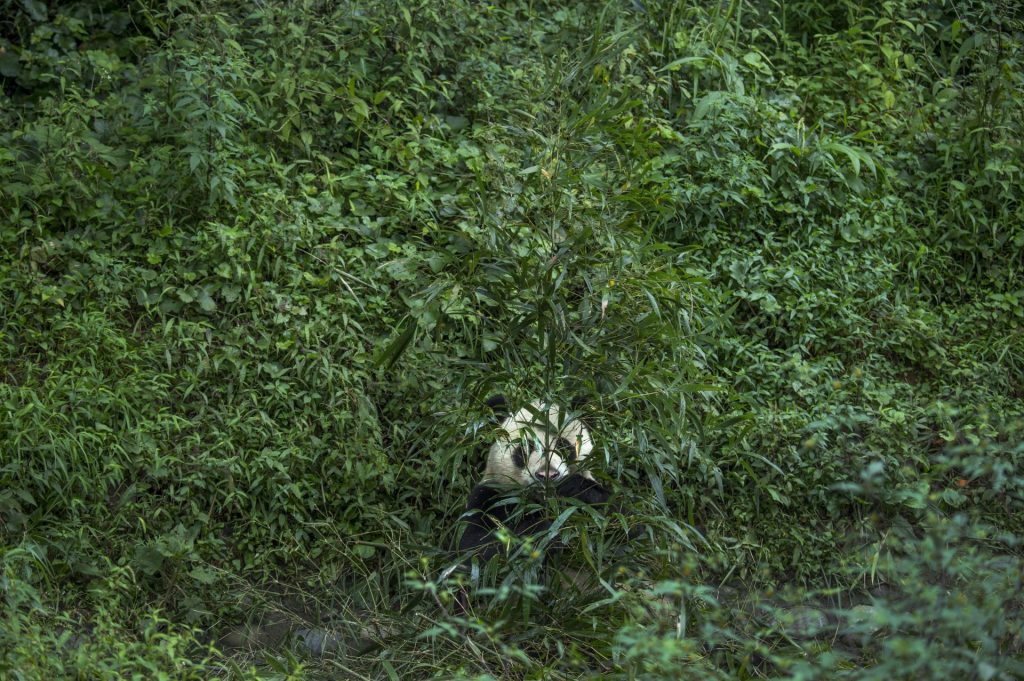 Camouflaged by a bamboo thicket, a giant panda will spend much of the day surrounded by and munching on its favorite food at Bifengxia. Pandas used to eat both meat and plants. At least two million years ago, their diet shifted to bamboo.

In a statement to the Associated Press, China’s State Forestry Administration disputed the classification change because the pandas struggle to reproduce and their habitats remain splintered by human intervention. Still, the success of China’s effort is encouraging.

“We need to hear these success stories to motivate and inspire us to do more,” Vitale says. 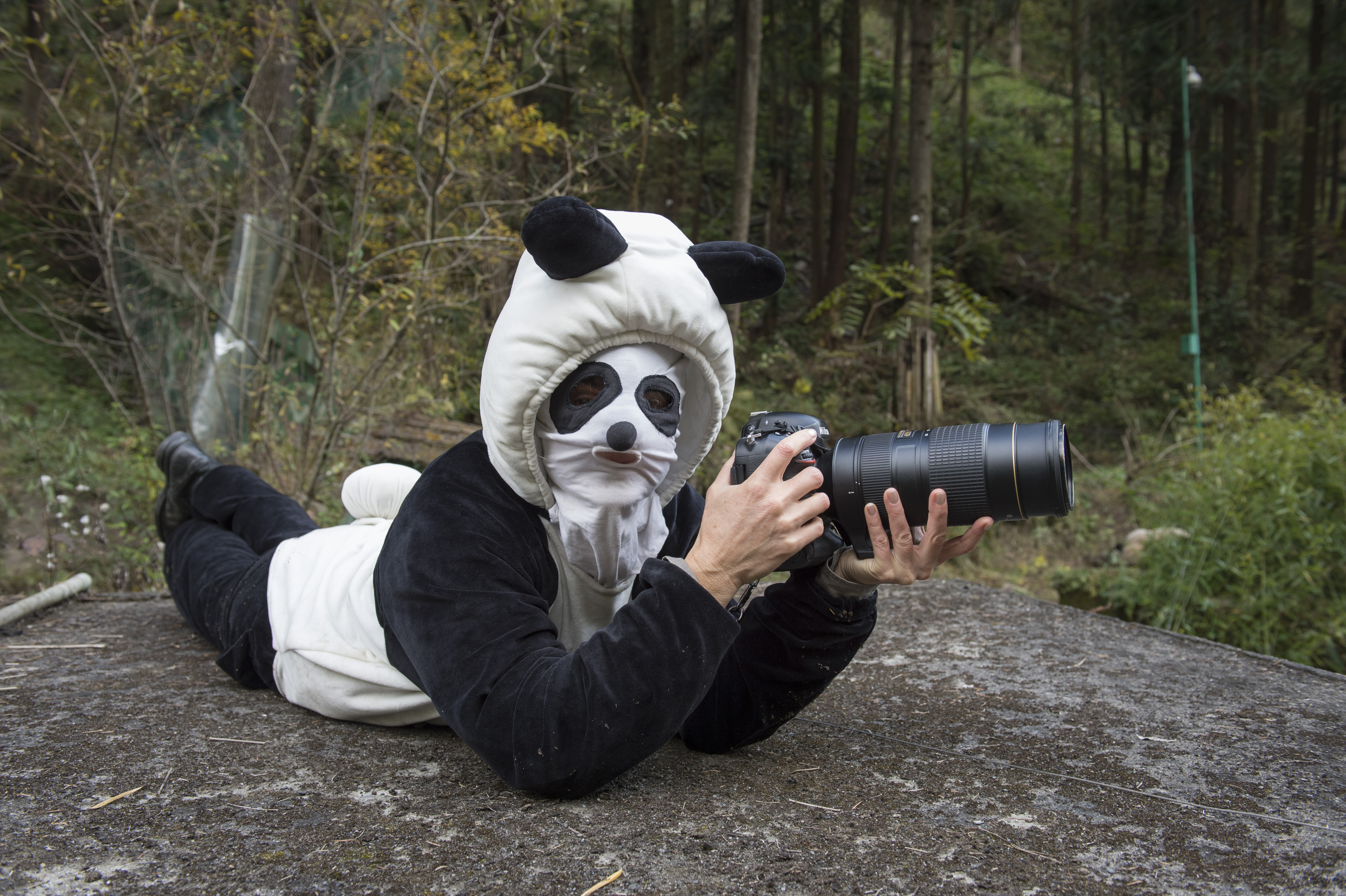 Ami Vitale dressed in a panda costume, photographs Giant pandas that are slated to be released into the wild at the China Conservation and Research Center for the Giant Panda at Wolong. She was part of the first Western team that was allowed to photograph Zhang Xiang as she was released into the wild. The center is known for its extensive breeding research projects and highly successful captive breeding program.

Ami Vitale’s journey as a photographer and filmmaker has taken her to more than 90 countries where she has witnessed civil unrest and violence, but also surreal beauty and the enduring power of the human spirit. Vitale is an Ambassador for Nikon and a contract photographer with National Geographic magazine. Her work is exhibited around the world in museums, galleries and are part of numerous private collections. She has garnered prestigious awards including the first Magnum Inge Morath grant along with multiple prizes from World Press Photos, the International Photographer of the Year prize, the Daniel Pearl Award for Outstanding Reporting and named Magazine Photographer of the Year by the National Press Photographer’s Association, among others for her work in Kashmir. She is a founding member of Ripple Effect Images, a collective of scientists, writers, photographers and filmmakers with a mission of creating powerful stories illustrating the very specific issues of women in developing countries. She is also a member of the Executive Advisory Committee of the Alexia Foundation’s Photojournalism Advisory Board. Now based in Montana, she continues to make films and stories of the planet’s most pressing issues and frequently gives lectures and workshops throughout the Americas, Europe and Asia.