Krishna Valdez Ramírez, best known in the photographic world as Krishna VR, was just 17 years-old when she won the “Under 20” prize at SIPAContest 2016 with her self-portrait, Ofelia. The Mexican photographer is known for her lush and creative self-portraits. She says making the image helped her resolve a period of blocked creativity.

“The most difficult thing for an artist is to get out of an artistic block… sometimes the things we do to inspire us are not worthy, and the ideas have to come spontaneously.”

Krishna says the idea for the photo came to her when she and a photographer friend were discussing one of their favorite paintings, Ophelia by Sir John Everett Millais. The project wasn’t easy with cold winter weather and other inconveniences, including the fact that Krishna served as her own model, photographer, and assistant at the same time.

At the end, she said she felt satisfied that she was able to transmit the feelings she experienced while reading Shakespeare’s Hamlet to create the character in the photograph. The production of the picture lasted for about a week. “It is always difficult for me to know when a work is finished as I am a perfectionist in my works of art.” But days later, when she finally saw the completed image, she knew that everything was as she had visualized.

“I transmitted the melancholy in a beautiful, unique way. Sadness was what inspired me to create something without imperfections, when in fact I was drowning inside, like Ophelia.” 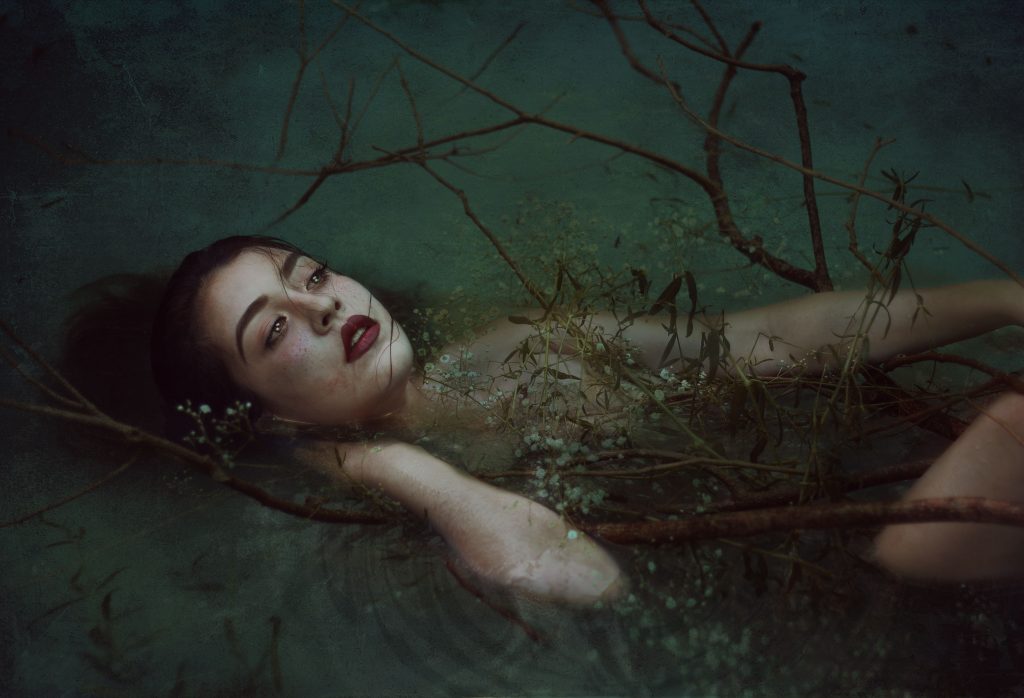 Krishna Vr is a young Mexican photographer well-known for her creative and conceptual works of art. Krishna demonstrated extraordinary artistic talent in her early years, creating nonexistent characters that usually just existed in her imagination. About five years ago she took her first picture with a professional camera and she felt that photography could be a way to express herself with her own body as she got inspiration from other conceptual photographers on the web. A close friend of one of her teachers from drama class discovered her talent and helped her open her first exhibition in her home town, a great experience for the then-15-year year-old artist. Following the exhibition, Krishna began interacting more and more on projects and ideas that helped her present her work to the world. One of her first important achievements was the opportunity to exhibit of one of her photographs in the ‘Exposure Award Collection’ at the Louvre Museum in Paris.