National Geographic photographer Melissa Farlow has long loved horses. As a child, she had a docile, one-eyed pony that she rode around in her backyard. 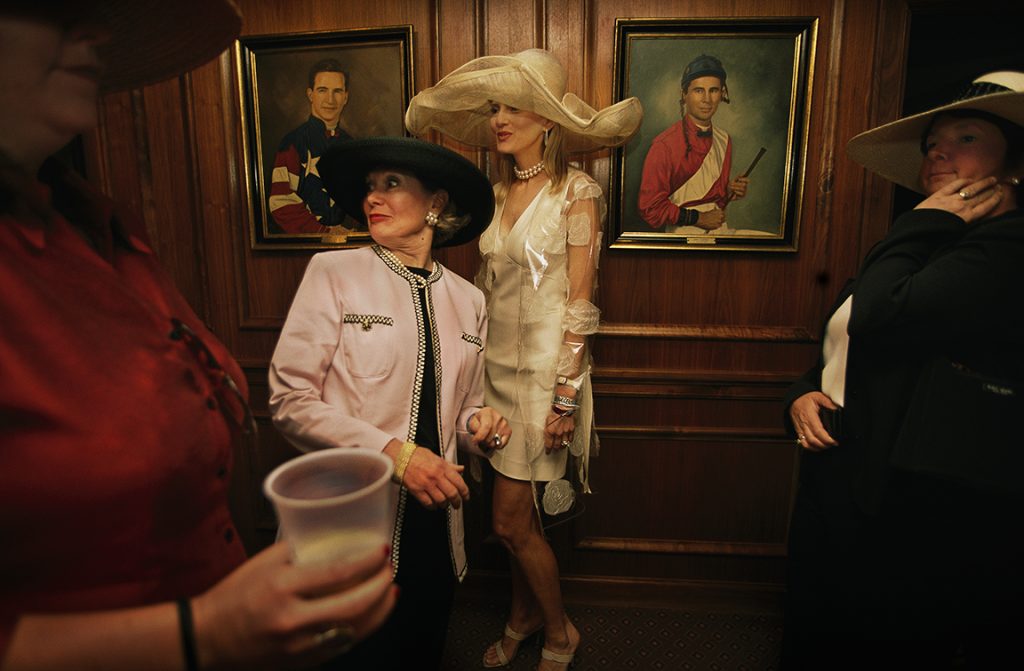 Stylish, extravagant hats are a long-standing tradition at the Kentucky Derby. Competition for the best dressed is nearly as fierce as the race outside. Women parade in costume finery in the Turf Club. 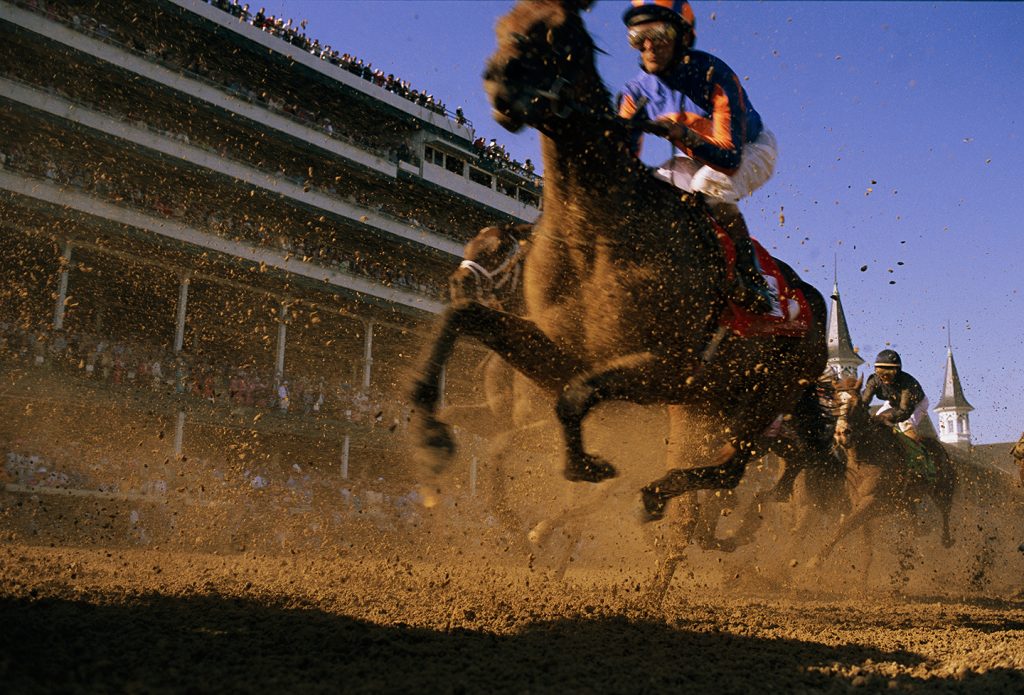 Dirt flies up as horses gallop down the track in front of the twin spires of Churchill Downs, competing for a million-dollar purse and a place in history. First held in1975, the Kentucky Derby is one of THE most famous two minutes in thoroughbred racing.

These days, she’s working hard to document – and save – the wild mustang herds threatened in the American west.

Horses have a fascinating history in North America. They belong to the genus Equus, which, according to scientists, originated in North America about 4 million years ago and spread to Eurasia (presumably by crossing the Bering land bridge) 2 to 3 million years ago. The last extinction, possibly caused by humans along with mammoths, took place 13,000 and 11,000 years ago, at the end of the Pleistocene. However, by then, horses had spread to Asia, Europe, and Africa. 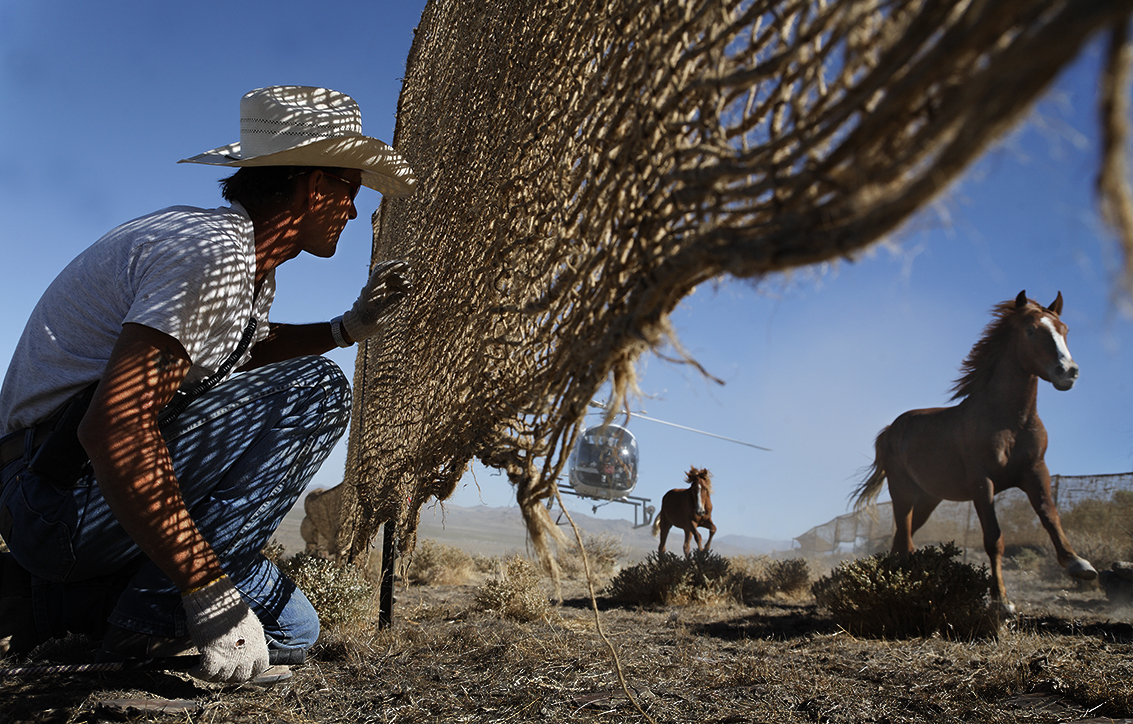 BLM is gathering almost 900 horses that have little food in the Nevada desert. Cattor Livestock Roundup Inc out of Nephi, Utah is rounding up the horses with helicopters. They are shipped to Palomino Valley to be sorted and inspected. Mares and foals are marked to they can be reunited. The Cattor’s keep the dust down and cool the horses with a water spray.

Mustangs are descendants of horses that were brought to the Americas by Spanish explorers in the 16th century. Until the early 1900s, an estimated two million descendants of the Spanish horses roamed the west. By the mid-1600s, Plains Indians began capturing and taming them. The Lakota called the mustangs sunka wakan, or sacred dog. 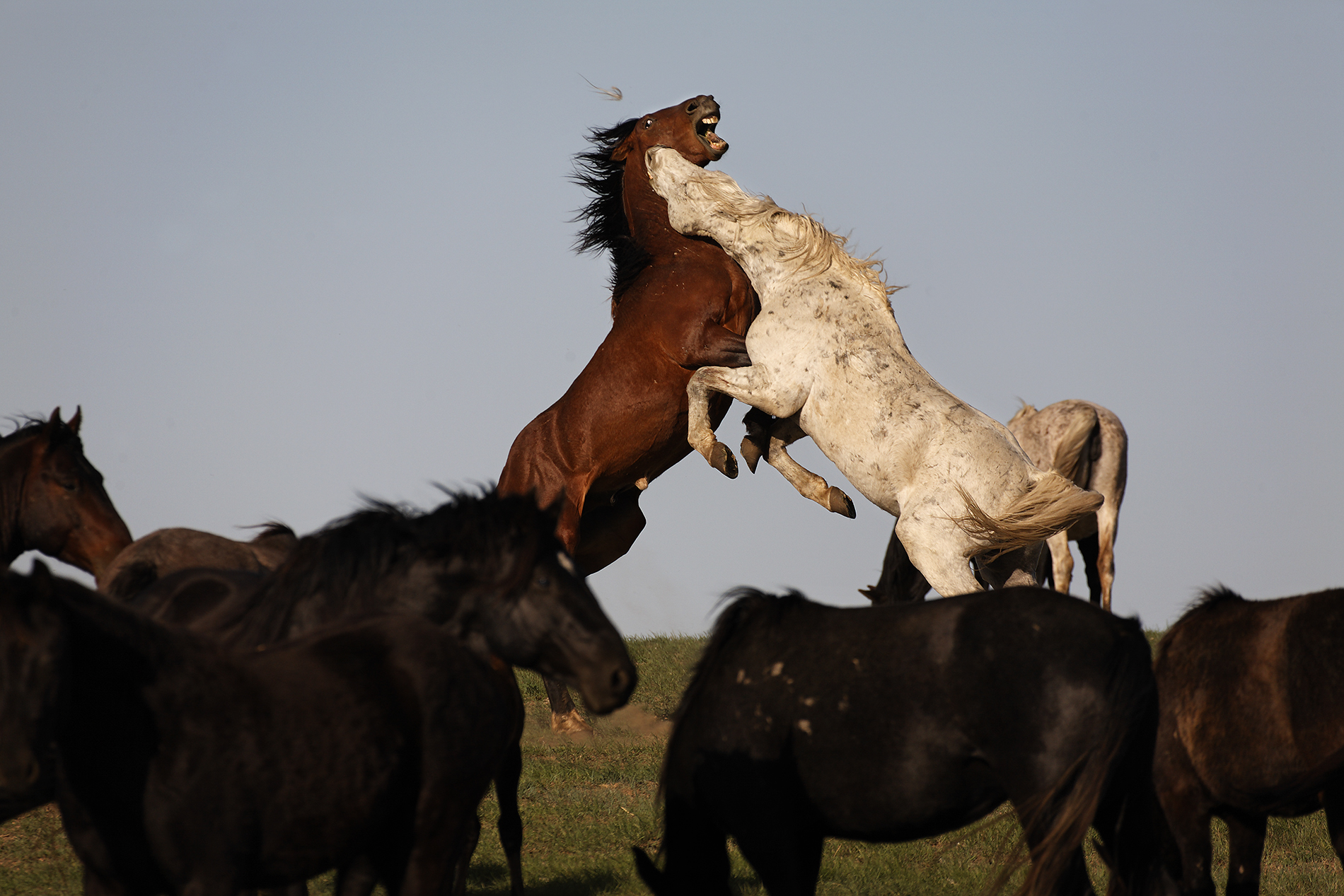 A stallion goes for the throat of another stallion in the herd. Fighting can be fierce and unpredictable as horses jockey for dominance and to win the most mares. The White Sands herd was rescued by Karen Sussman and the International Society for the Protection of Mustangs and Burros. They have a rare gaited gene. 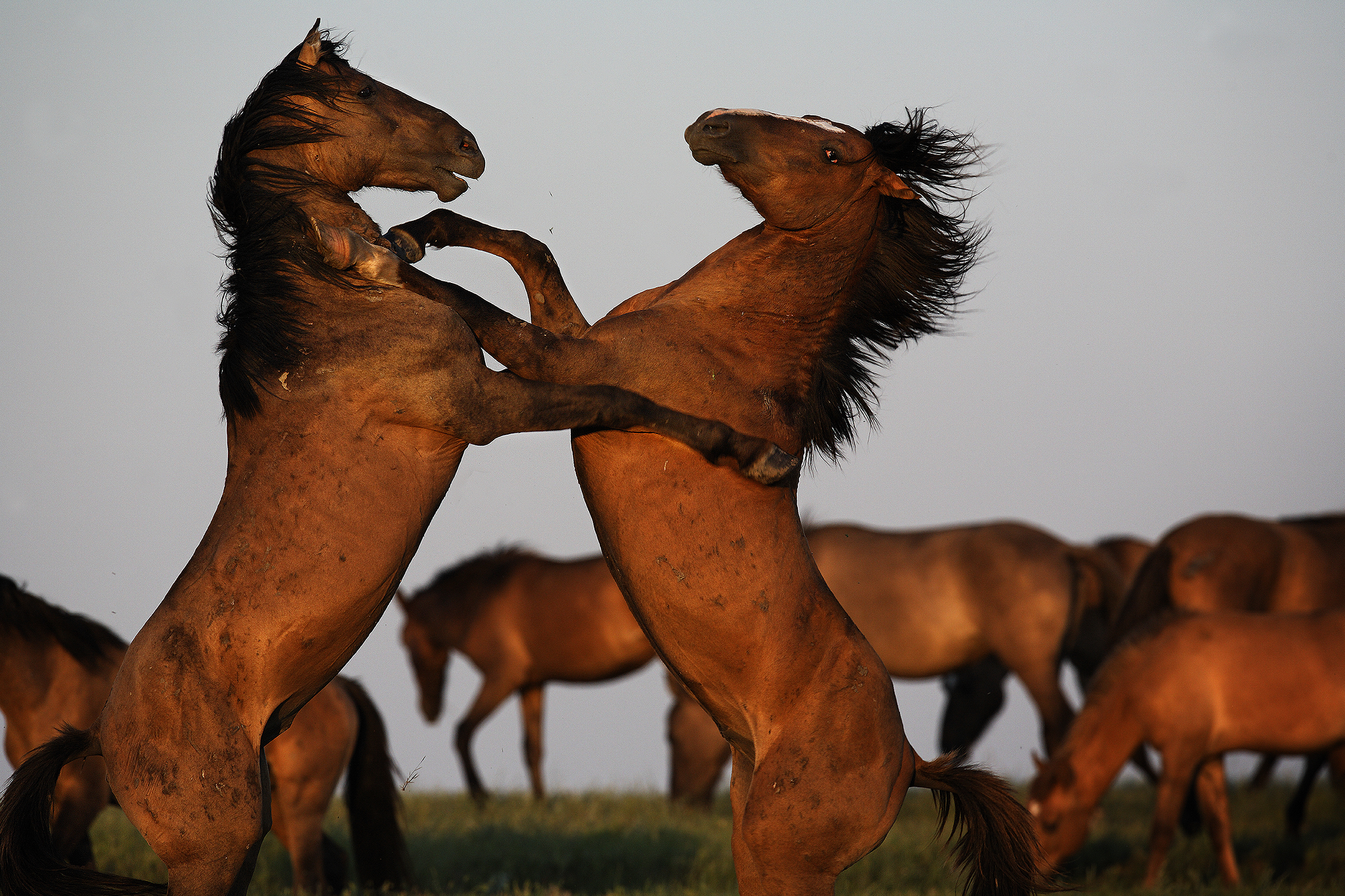 Two battle-scarred stallions fight for dominance in the strong social hierarchy of wild horses. They challenge each other to win the most mares. Their primitive markings show that their bloodlines are of Spanish origin when horses arrived in North America with the Conquistadors. Most horses in this herd are dark with a black mane and tail, and a dorsal stripe down their backs. Some have zebra stripes on their legs. These stallions and many others were captured in Arizona and rescued by Karen Sussman. She is president of the International Society for the Protection of Mustangs and Burros.

Farlow has traversed the wild terrain of the west in all kinds of conditions to document the horses. Once, while photographing a herd, a stallion charged at her. She reacted by sitting down. Thanks to her own quick instinct and experience as a photojournalist documenting difficult and intense situations like riots, she says she knew what to do. The stallion stopped in his tracks, his territory no longer threatened. He quit snorting and stomping and she soon found herself surrounded by curious mares and foals.

Last year, Farlow teamed up with writer Terri Farlow to publish a new book about the horses: “Wild at Heart: Mustangs and the Young People Trying to Save Them.” 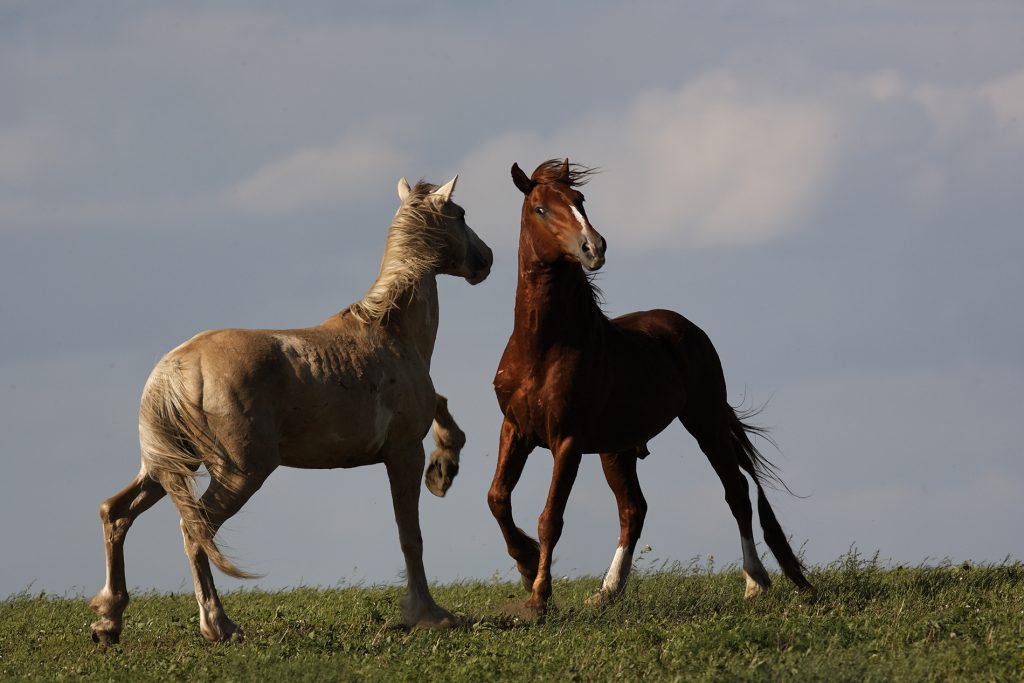 Wild horse stallions begin the fighting ritual. They stomp and snort in a fierce ceremony—mirroring each other and staring eye to eye. They may back down and walk away from each other or unpredictably go for each other’s throats. 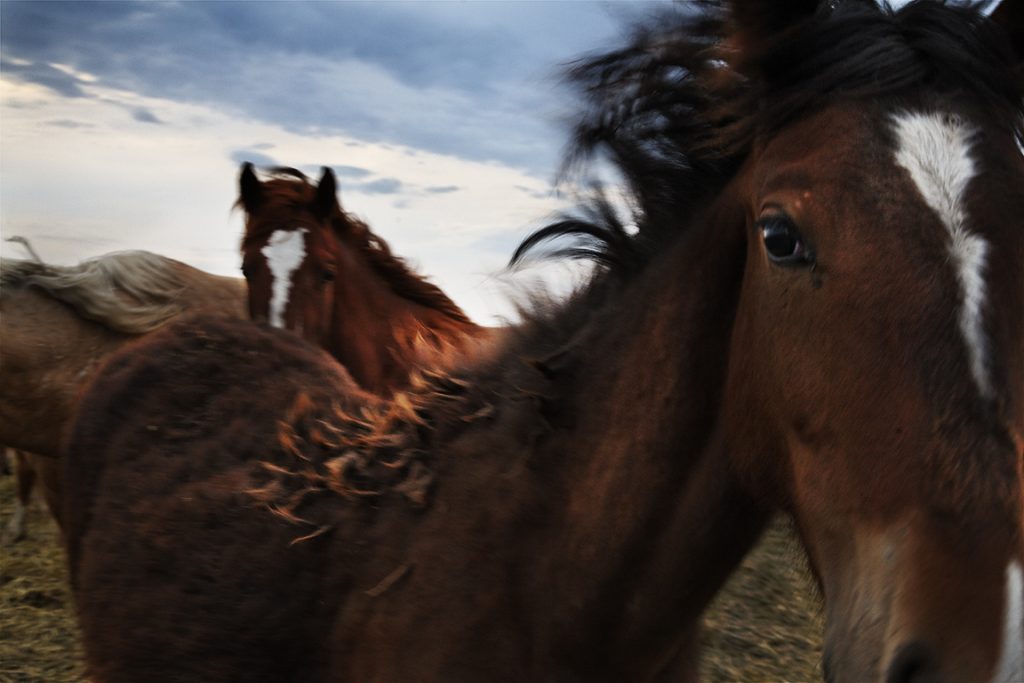 An inquisitive yearling with a full winter coat approaches for a closer look. He is part of the Catnip herd, which was mostly bred for the U.S. Cavalry in the 1800s.

“Much of the BLM funding is goes to providing care for the once wild horses in long-term facilities,” writes Farlow in her reportage on the horses for National Geographic. “More wild horses are held in captivity than those running wild and free. And there they stand, at the heart of a bitter debate.” 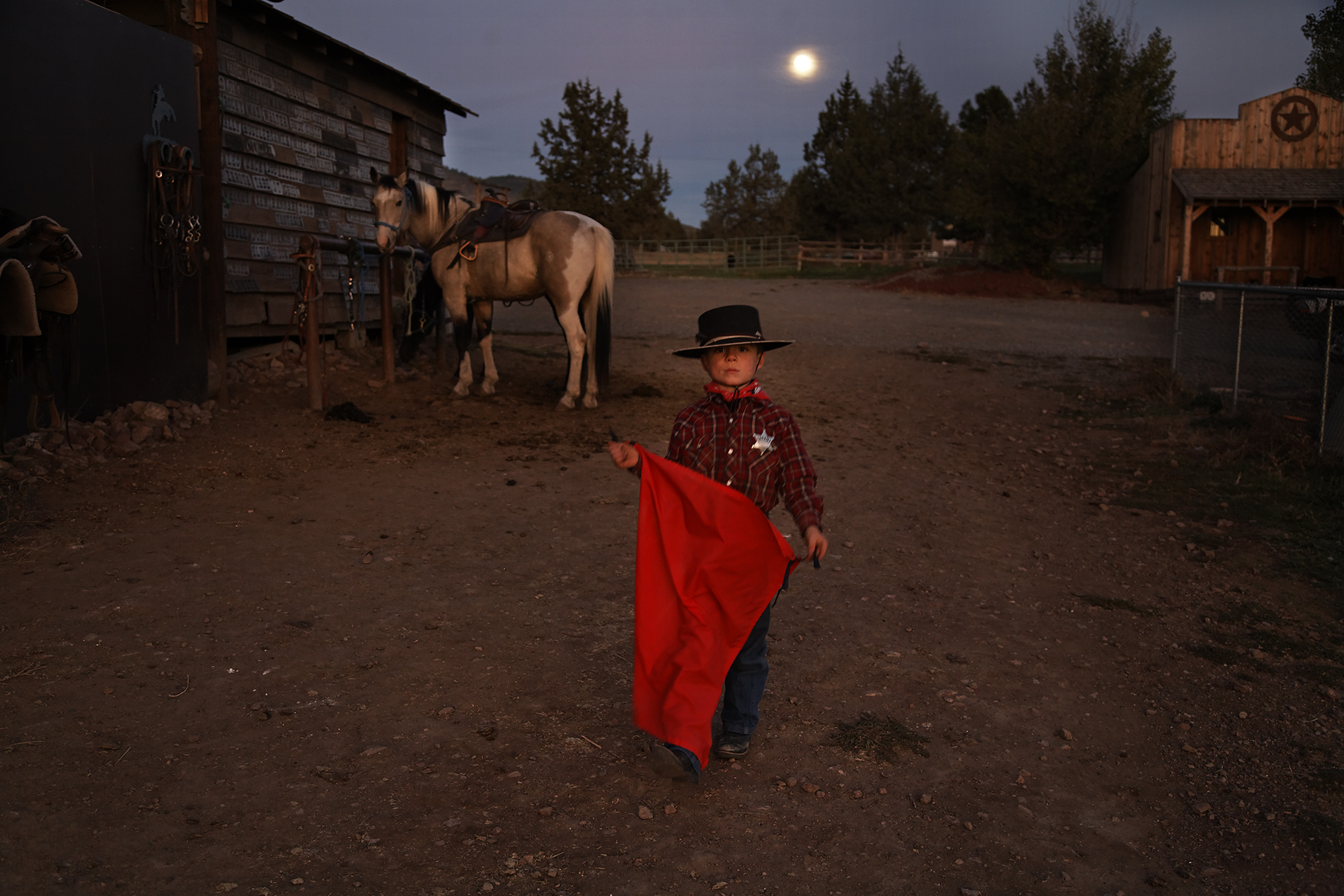 Horses taken from the wild can be adopted and trained. Several generations of the Lauman family, including this six-year old cowboy, work with mustangs and ride them. They earn their trust in a “horse whisperer” kind of way as opposed to breaking the horse’s spirit. The owners of adopted wild horses consider them confident, loyal and sure-footed on the trail.