“It seemed dreadful to see the great beast Lying there, powerless to move and yet powerless to die, and not even to be able to finish him.”
–George Orwell, Shooting an Elephant, 1936 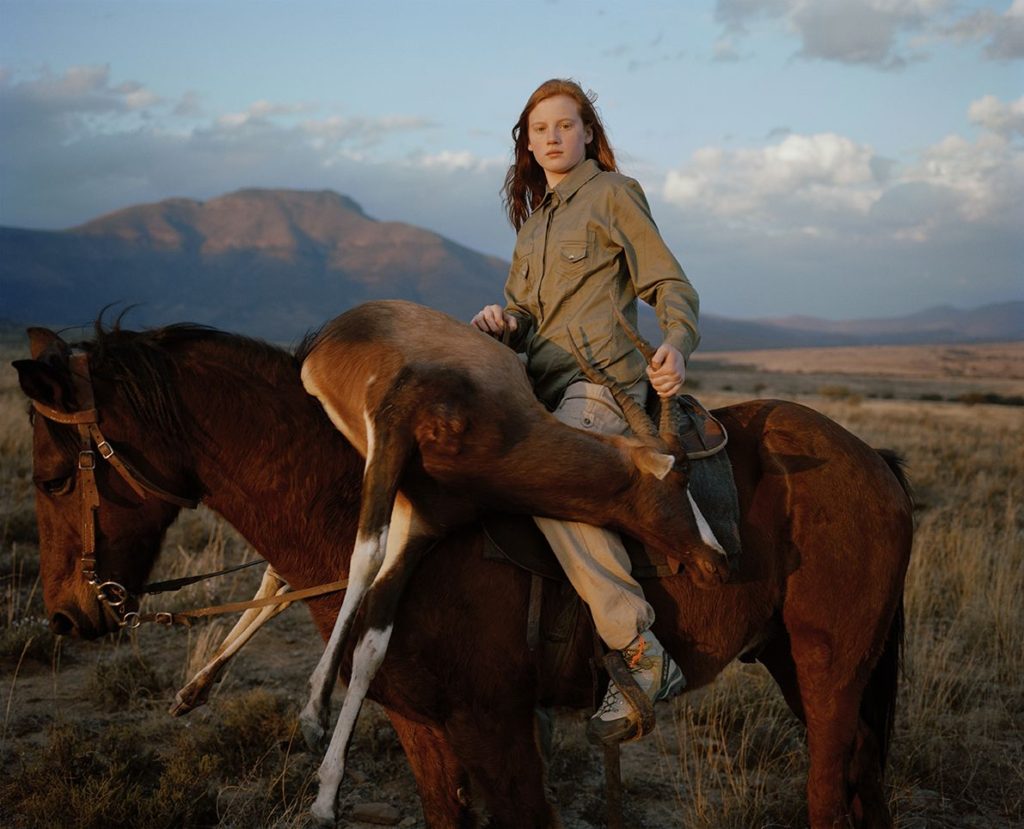 A 13-year-old girl from the United States carries a bontebok, shot earlier in the day, back to camp in the Eastern Cape, South Africa. Supporters of trophy hunting say hunt fees help conserve wildlife and benefit local communities, opponents say killing animals, such as elephants, lions, and rhinos for sport is unethical and does little to protect them.

In a time of commodification of wildlife and heavily populated urbanized worlds in which people often don’t know where their food comes from, these are the difficult questions that British documentary photographer David Chancellor, who splits his time between London and South Africa, strives to find answers to in his stunning series of works, “Elephant Story” and “Hunters.”

Traveling across Africa for an earlier project on HIV/AIDS, he became more and more intrigued by game reserves and the complexities of trophy hunting. 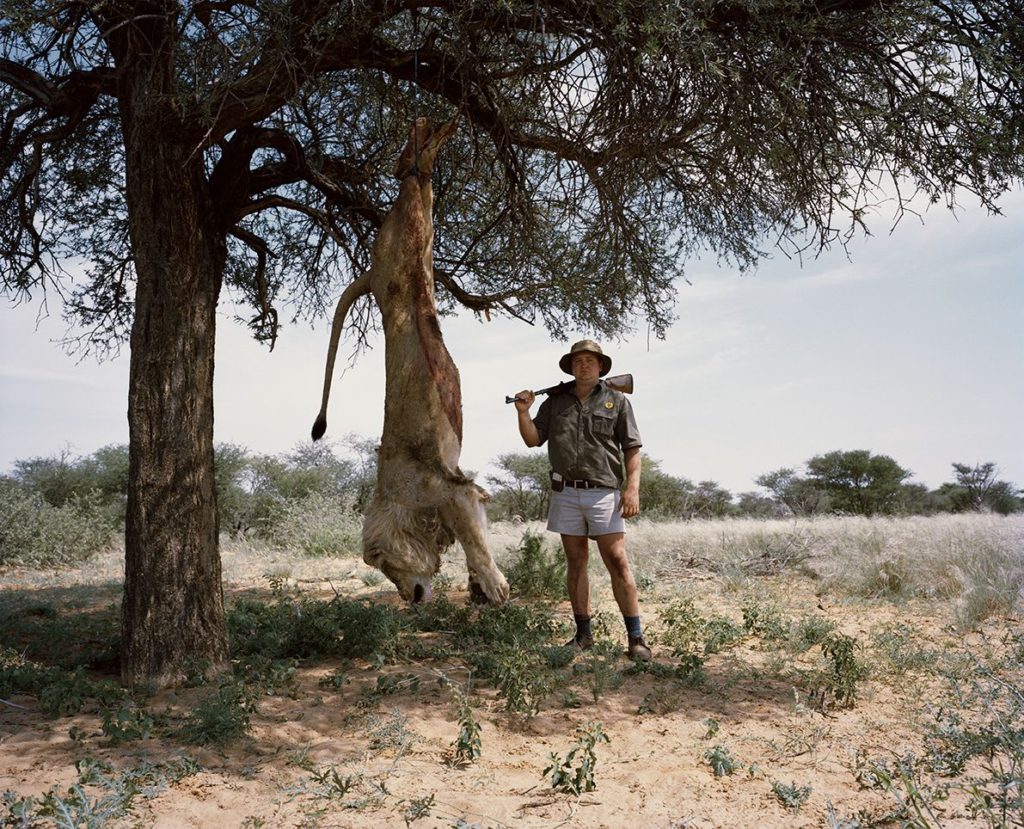 Beginning in about 2008, he began documenting legal hunts in Africa.

“Hunters always talk about hunting and conservation going hand-in-hand,” he says. “I wanted to understand how killing an animal can conserve it.” 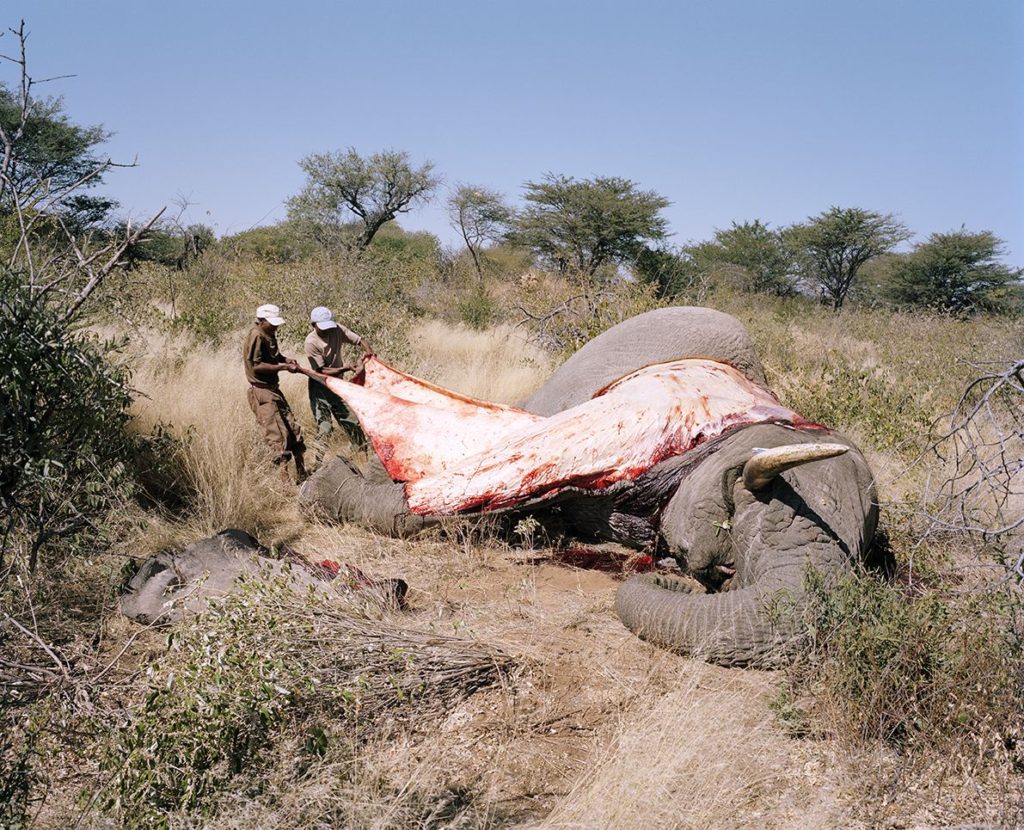 Villagers prepare to skin an elephant, hunting elephant, Nyae Nyae Conservancy, Namibia. The San people, who inhabitant Nyae Nyae Conservancy in Namibia, limit the trophy hunting of elephant on their lands to 5 individuals per year. A portion of the hunter’s fee is paid directly to community members and to fund conservation projects to protect the area’s wildlife and ecosystem. The hunter leaves with the elephant’s tusks, skin, and feet. The San receive approximately 3 tons of meat derived from the animal.

As a boy, Chancellor was moved by Orwell’s powerful and emotional account of killing an elephant.

The story came to life while photographing an American hunter kill an elephant in Zimbabwe.

“The traumatic events of the elephant hunt brought his words back,” he recalls.

Yet, he also cautions against knee-jerk reactions. 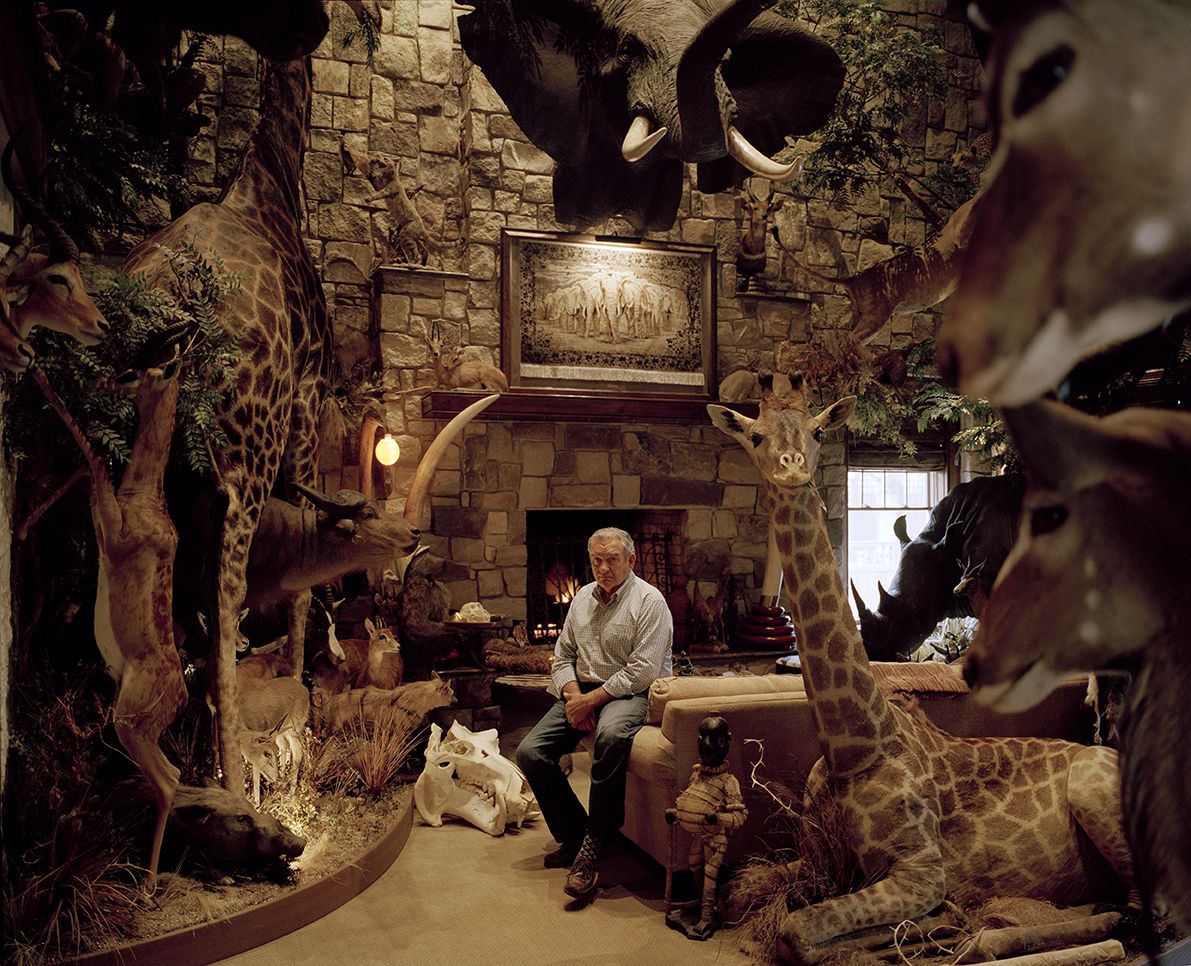 Surrounded by more than a hundred African game trophies in his home in Wilmington, Delaware, a hunter says that the pursuit of game has been a passion of his since he was 12 years old. “Hunting ‘sort of got into my blood’,” he says, adding, “I’d like to think I’m a conservationist and a collector.”

“I’m not a hunter, I never will be,” he says. “What I am is an observer of our extremely complex relationship with wildlife, and I work with those who are at the forefront of this relationship.”

His series, “Elephant Story” arose from photographing a hunt under the CAMPFIRE program (Community Areas Management Programme for Indigenous Resources). Under CAMPFIRE, at least half of the revenue from leasing trophy hunting concessions to foreign hunters (95 percent of whom are from the United States) goes to local communities. The meat from such hunts is also totally utilized by the community. Hunters leave with the skin, ivory and elephant’s feet.

The series and book “Hunters” followed. A second book, “With Butterflies and Warriors,” focused on his award-winning series documenting community-based conservation in Kenya, is in progress.

“Hunters” took Chancellor across the world. His subjects include bear hunting in Maine, a cougar hunt in Utah and a legal giraffe hunt in South Africa.

Hunting as conservation is certainly not a new idea.

“From Charles Darwin and John James Audubon to the likes of Theodore Roosevelt and Ernest Hemingway, the most enlightened hunters have long viewed themselves as naturalists and conservationists, committed to sustainability among animal populations and the preservation of wild places where they stalk game,” Chancellor says, adding that hundreds of millions of dollars in federal excise taxes levied on hunters go directly to wildlife management and related activities each year in the United States alone. 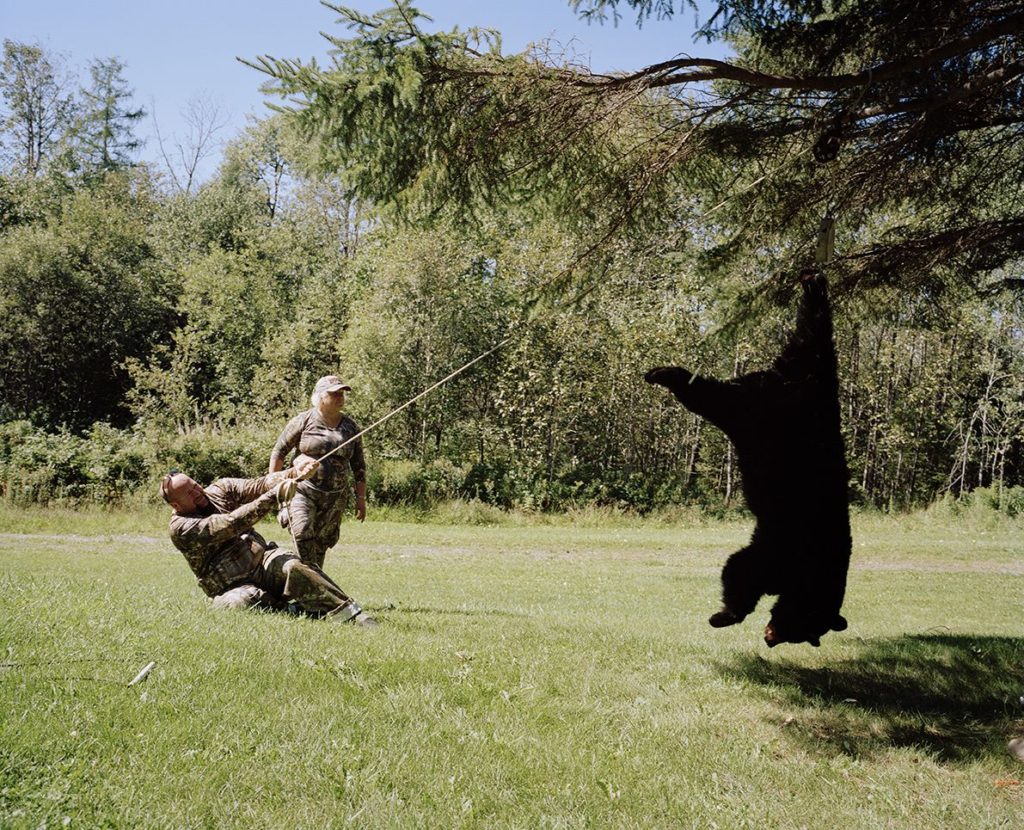 A pair of hunters lifts a black bear shot in Maine, USA in 2016 with a pulley. The bear had been baited, a practise that involves placing caches of food to draw the animals to a particular spot in the forest before the hunting season begins. In Maine, the number of bears, which are not endangered, has been rising. Mainers recently rejected a proposal to ban hunting with dogs and baiting.

“I often get criticized for not making my feelings felt. If you understood the work, you’ll understand my feelings.”
–David Chancellor 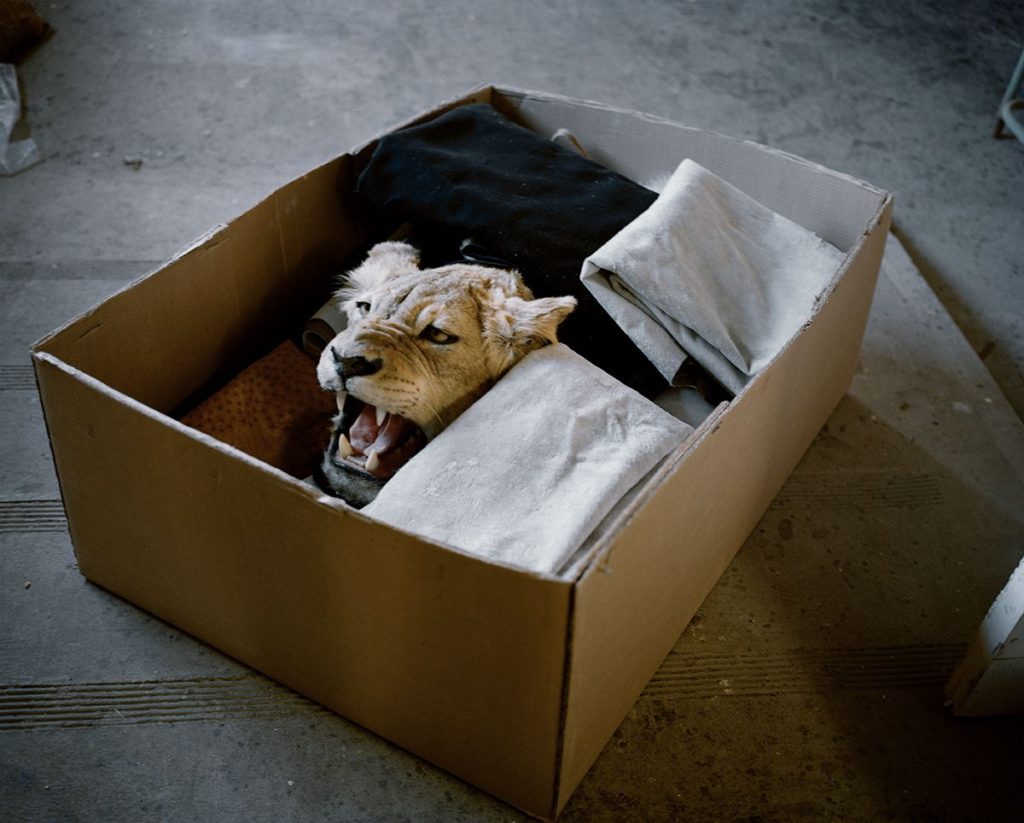 The head and skin of a lion, prepared for display by a taxidermist in South Africa, are boxed for shipment to the American client who shot the animal. In response to dwindling numbers of lions in the wild and doubts about the conservation value of hunting them, the U.S. has recently made it more difficult for hunters to import lion trophies. 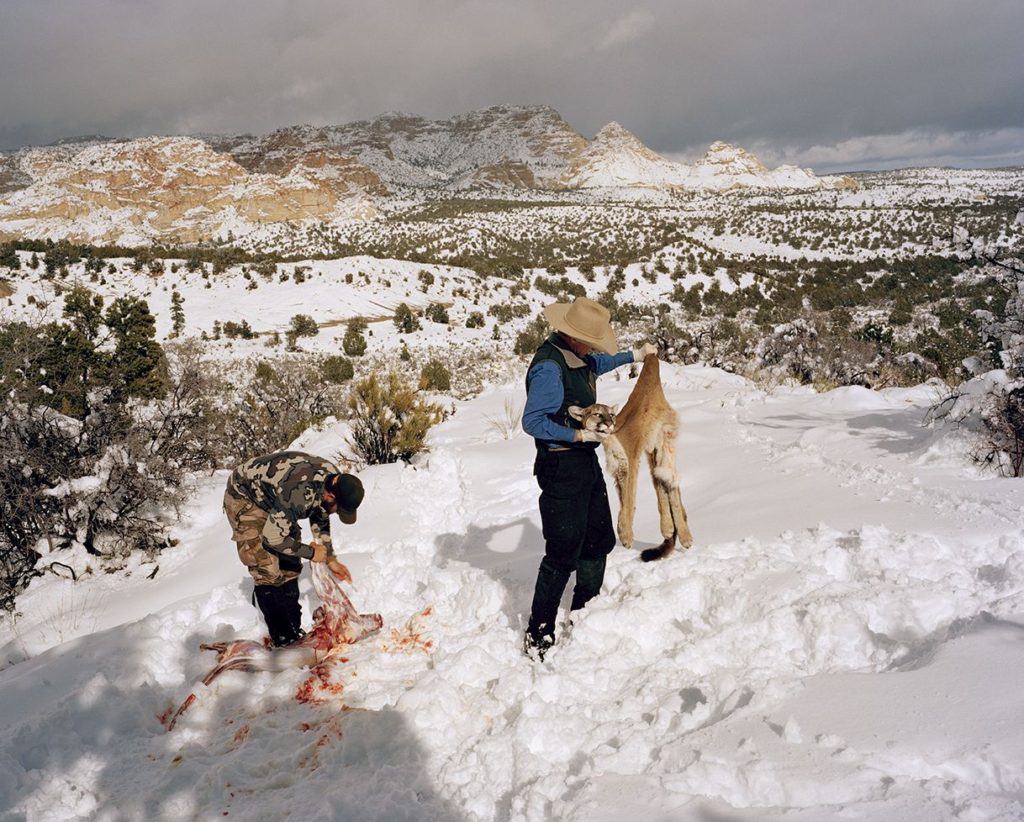 A hunter removes the skin from a trophy hunted mountain lion, Kanab, Utah, USA. Winter is hunting season for mountain lion because the elusive cats are easier to track on snowy ground. Each season the state sets a hunting quota, a number determined in part by how much livestock lions killed the previous year. Lions killed 416 sheep and other farm animals in 2016, and during the 2016-17 season, hunters took 399 mountain lions.

“And anyone who keeps a freezer full of venison is likely to tell you that the act of killing your own dinner in the wild is more humane than buying the plastic-wrapped meat of industrially raised livestock.”

But it’s not as simple as that, either. And his quest to find answers has taken a toll.

“‘Hunters’ has hugely impacted my life, and that of my family. It’s difficult, traumatic work. I’m so aware of our relationship with wildlife now in all its forms. I’m constantly inspired by what I see, and often appalled…I’m not trying to expose good practice or bad practice. What I’m trying to do is understand why we are doing what we do.”

At the heart of it all, and perhaps the most critical point, he says, is that the animals are not the problem.

“Our very presence boxes them into smaller and smaller places….and then we have to manage them as they strive to survive in the new world that we’ve made for them — our world, not theirs.” 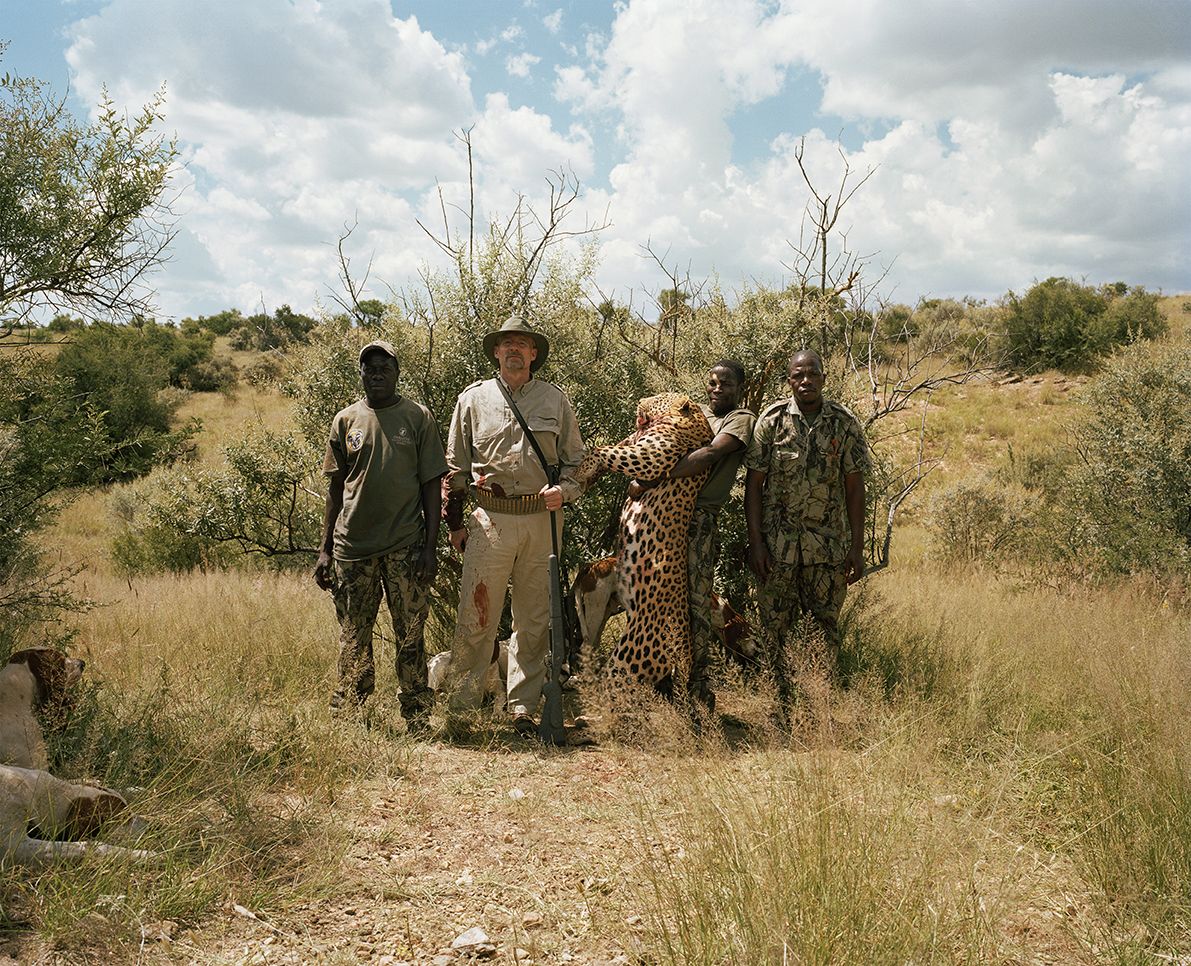 An American hunter stands with the trackers who guided him throughout the hunt, holding a leopard shot moments earlier. Leopards are elusive, and dogs helped track this one down. Namibia later banned the use of dogs because leopard numbers were falling dangerously.