From an early age, Peter Bauza wanted to create images with impact. 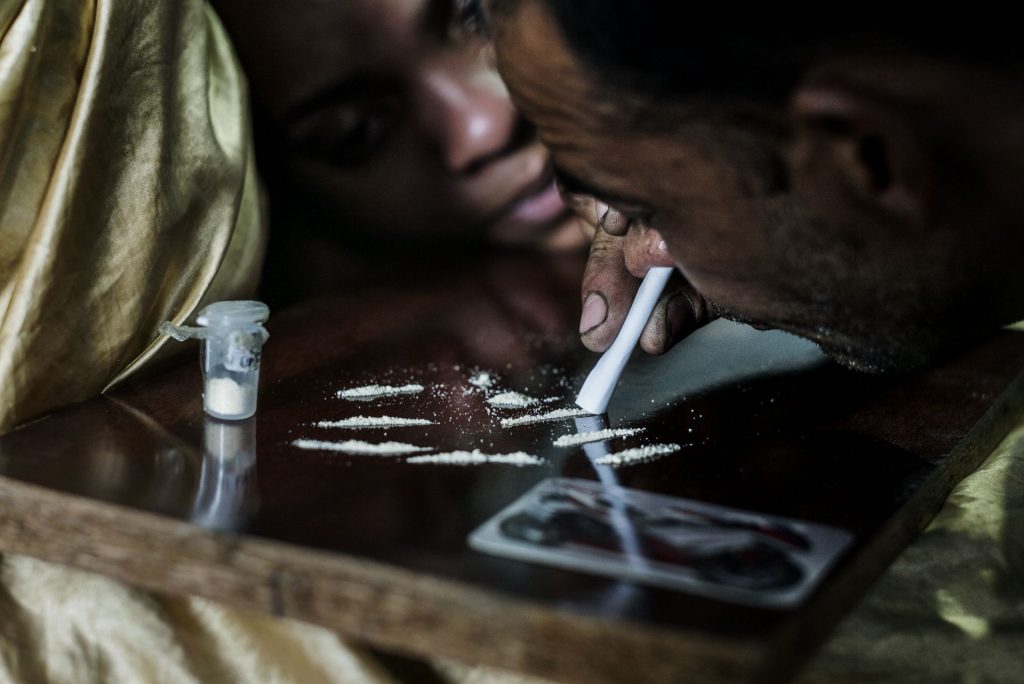 Two dwellers are snorting some cheap cocaine. Although they are aware of the strong housing rule of “no drugs”, the use of them is still a common problem.

“My photography is about defending people who need help,” Bauza says.

His storyboard, “Copacabana Palace” honors and documents the lives of more than 300 families who have been living in the outskirts of Rio de Janeiro for the past 10 years “sem teto, sem terra” (without root, without land).

They struggle in extreme conditions in abandoned and unfinished condominium blocks named “Jambalaya” after a television show or “Carandiru” after the famous state prison in Sao Paolo. 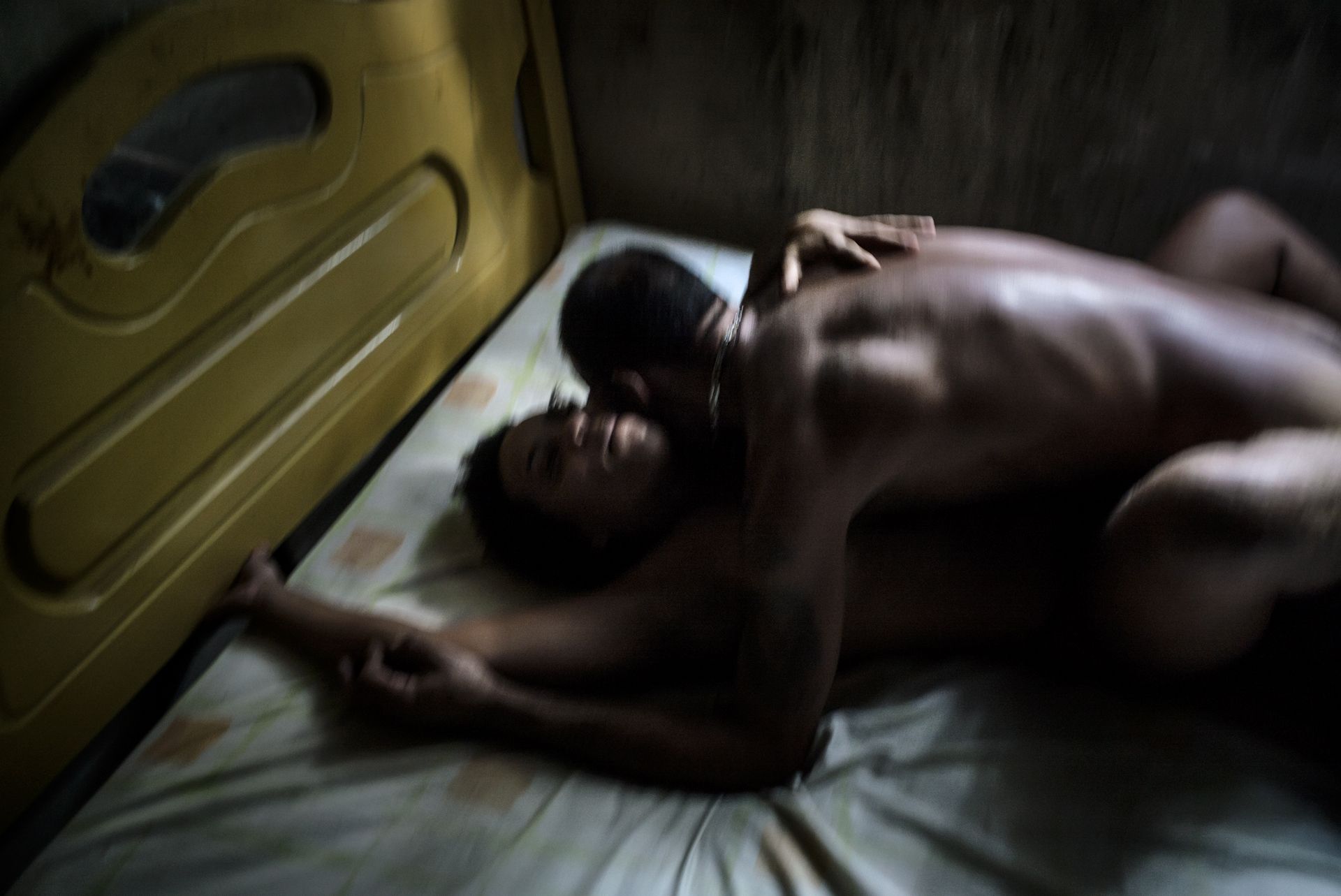 The German-born photographer pursued an international business career after graduating in commerce, which took him to several countries where he also developed his visual language. According to Bauza’s website, his life-long respect for multicultural viewpoints “fueled by the fluency in five languages also afforded him opportunities.” His work is published and exhibited internationally and he is highly committed to social and geopolitical issues related to conservation, global health, diminishing cultures, sustainability and the environment. He resides in South America and Europe. 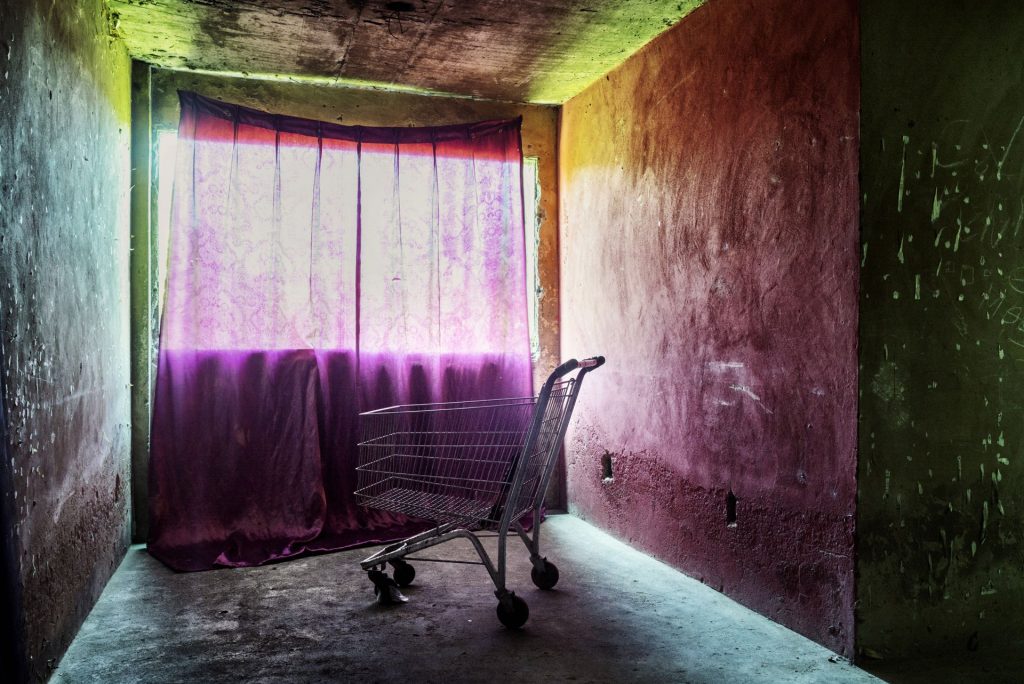 An empty room is being “prepared” for new living quarters . Squatting of abandoned and empty buildings is prohibited by law, but it is often the only solution for many of the “Sem Tetos, Sem Terras”, who can no longer afford to pay rent. 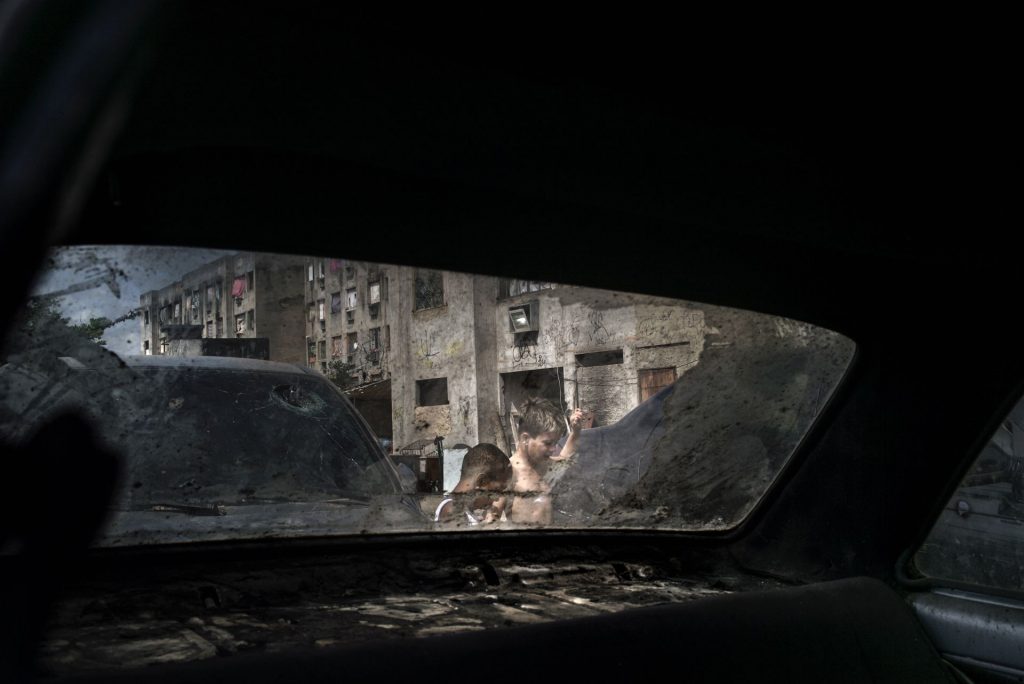 Two young boys are playing in front of the building between old cars. Parked and often abandoned cars give kids an interesting but also dangerous playground.

Bauza says he began working on the award-winning project “Copacabana Palace,” which is now also a book, in 2015 during a project in which he was documenting changes on the Avenida Brasil in Rio.

“Inspired by photographers that have done works in Africa I thought it would be a good idea to document the modernization of the old colonial infrastructure,” Bauza says. “At first I thought I arrived too late. However, 26 km from Rio de Janeiro I noticed a strange building, covered in graffiti, surrounded by love motels with no windows. Driven by curiosity I came face to face with the squatters.” 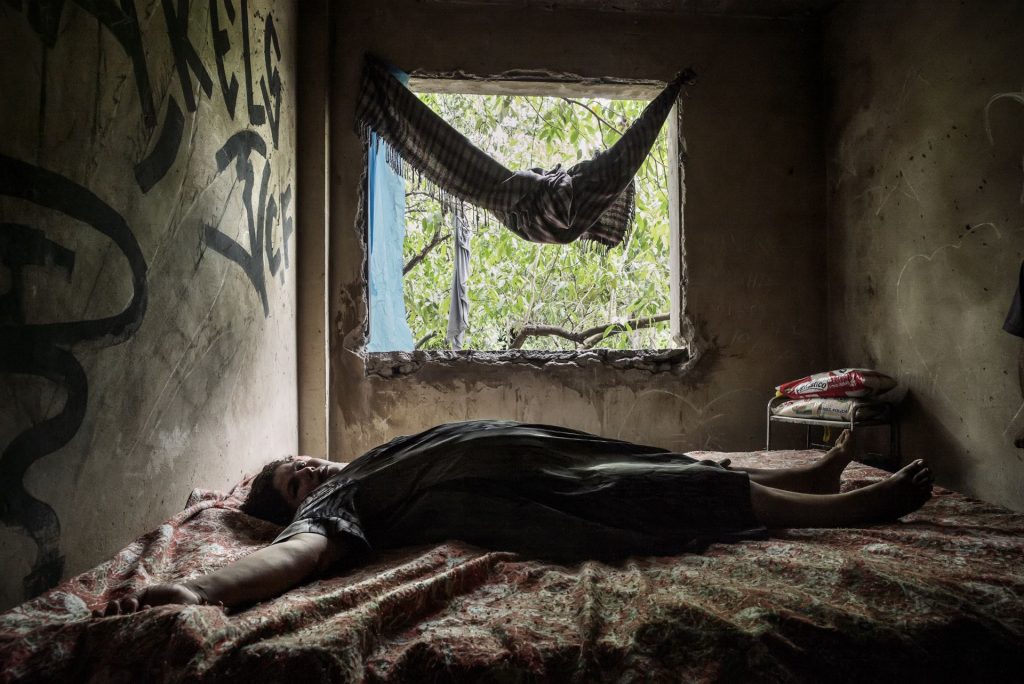 Simone is suffering from a growing tumor and the medical treatment necessary is out-of-reach. She has been accompanied by her husband to the local public medical service point many times. Besides an X-Ray and some pills nothing more has been possible. Despite her severe condition, Simone continues to work on a daily basis.

He then began to research squatting, adequate housing, etc. and realized that he had uncovered a hidden part of society.

“I had to search a long time to find it,” he says. “Hidden from our eyes this place is located in the outskirts, 60 km from all beautiful beaches and the real five-star hotel, Copacabana Palace.” Finding Jambalaya marked the beginning of his long-term project. Bauza spent 14 months living with the squatters. 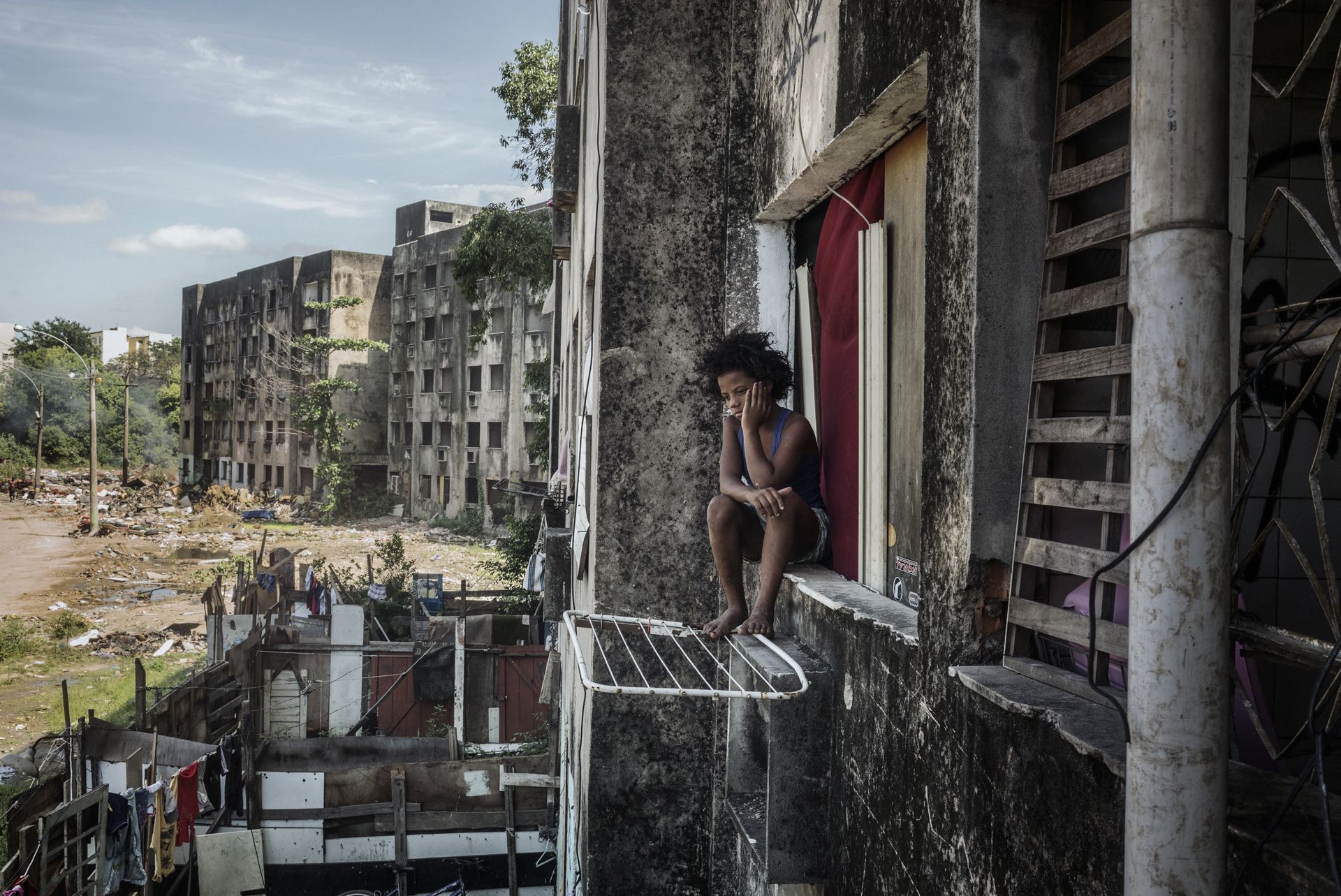 Young Eduarda (12) is part of a family with 7 other siblings. She is sitting out of a window observing what is happening in the street. She lives in one of the 6 unfinished buildings which are part of a supposed middle-class condo project, not far from Rio de Janeiro.

“I knew I had to stay and to tell their story, a story of their challenges, needs but also their joy, happiness and love. The ironical ‘Copacabana Palace’ name was given very soon after I found the name scrawled on a dormitory wall in graffiti. A name, that have been used later so often by the people.”

He says he didn’t really consider extending the project, but felt deeply that the story needed to be told – that his work could be an opportunity for change. 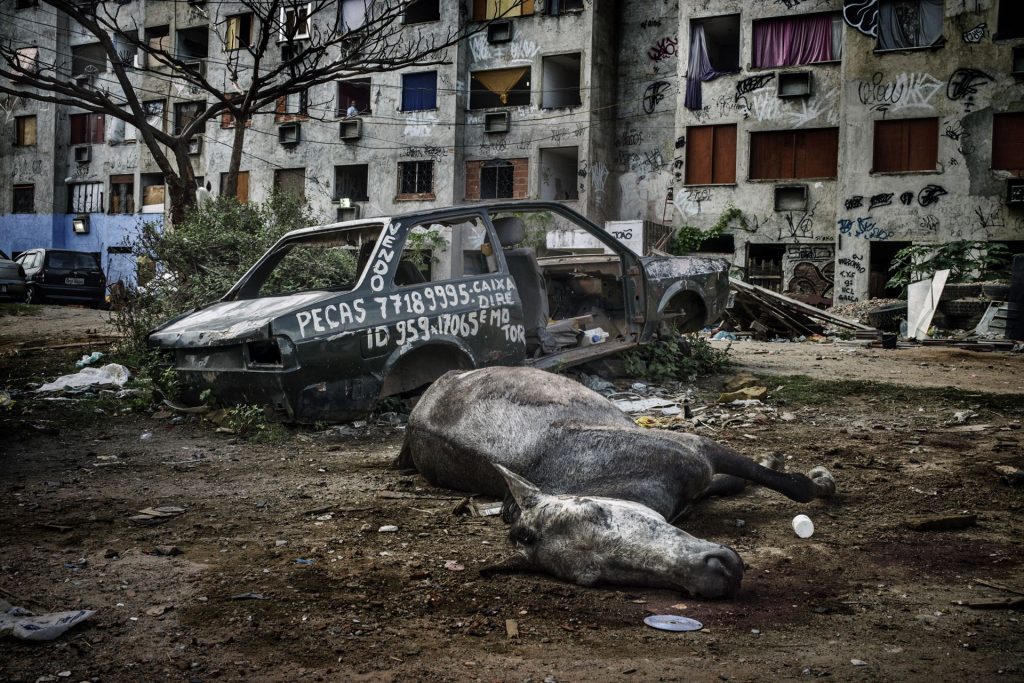 The thin red line between life and death is a daily reality here. A horse died in agony after having received bee stings throughout night and no assistance from the locals. This place is a very challenging and toxic environment.

“Indeed, 14 months is a long time with many up and downs. On the one hand you need to be close enough to be a friend but on the other far enough away to be objective,” he says. “Being friendly also means that you get close and this intimacy leads to understanding their feelings and sharing their life, their needs and their illusions…..The environment, safety and health is a challenging topic and many times I felt tired and drained. These are the moments you need good friends to talk with and to find new ways to think about and approach the body of work.”

Bauza is currently working on several new projects yet to be disclosed in detail. Among other topics, he said he’s focusing on issues around migration and the environment. 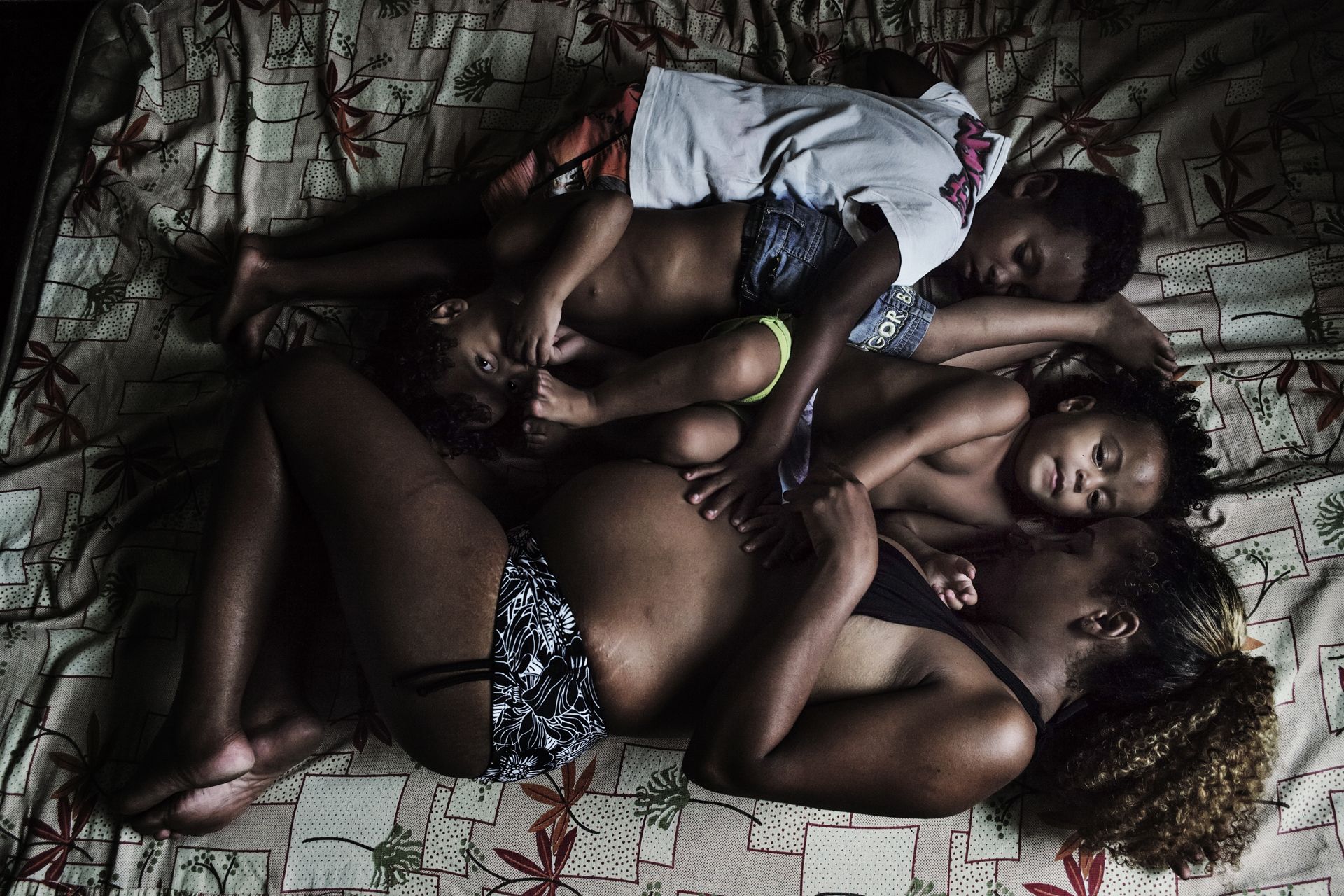 Edilane and 3 of her 7 children are resting on a mattress on the floor. She is soon to give birth to a son. Life challenged her. She trusted wrong partners many times. She is one of the awardees in the official housing program in Brazil.