For Polish photographer Marcin Ryczek, the process of perception and waiting is characteristic of an integral to his work.

“Perception is an intense observation of reality, looking for something special in seemingly ordinary places,” he says. “Waiting is watching for the moment when something will happen in the place of your choice; something which will be a tangible visual reflection of my private thoughts.”

He shot his award-winning image, “A Man Feeding Swans in the Snow” in Cracow, Poland and said for a long time, he’d been thinking about the positive and negative aspects of life “and how they coexist in osmosis.”

These thoughts led him to search for a way through photography to present the idea with the “and (+)” symbols in photography.

“During a walk around Cracow, I noticed a snowy space separated from the dark water by a straight line of the waterfront which reminded me of the Yin Yang symbol. I went back to this place several times to capture the right moment,” Ryczek says. “One day I saw the dark silhouette of a man against the light background, and the white swans on dark water. I grabbed the camera immediately – I was fascinated by the beauty of this scene. To me, this simple, powerful frame infused with universal symbolism is legible to many different, often diverse cultures.”

The photographer’s instincts were right on. The photograph was published in newspapers and portals around the world, from The Guardian to La Repubblica to Athens Voice,” among other publications and honors. The image also had 3 million views on the American website Reddit in one day.

“Photographs are metaphorical, ambiguous, and universal,” Ryczek says. “They stimulate the imagination, encouraging the viewers to their own individual interpretation.” 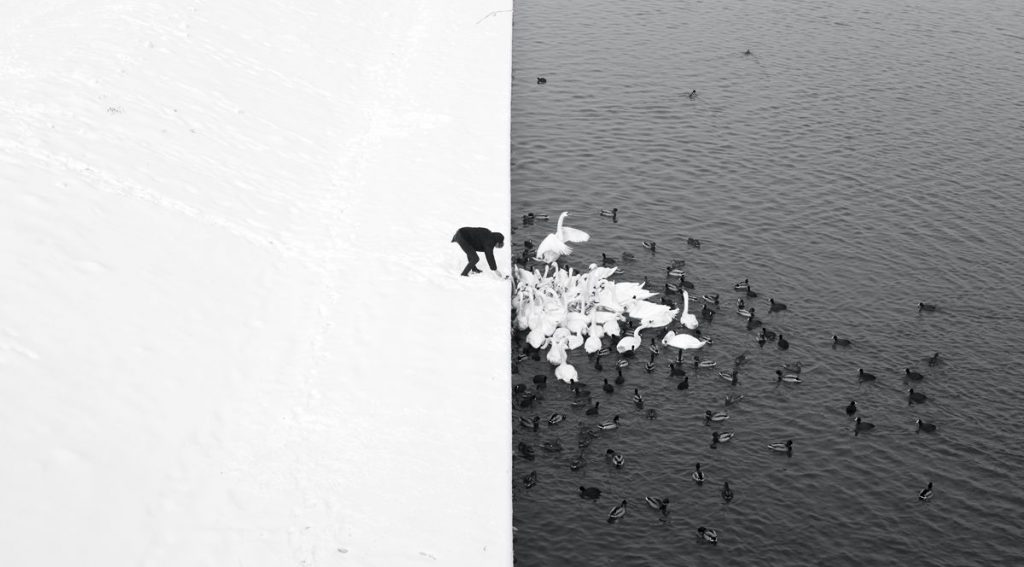